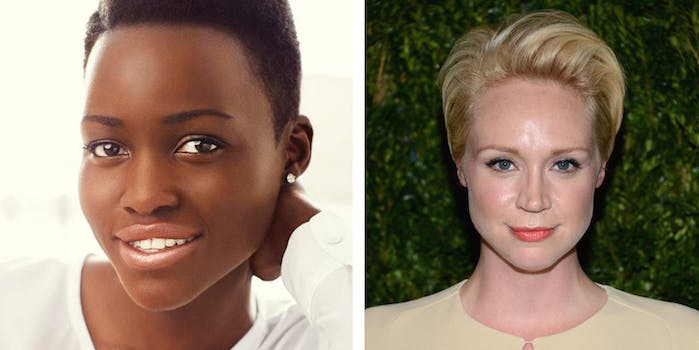 Rumors that there might be one more woman cast in Star Wars: Episode VII weren’t quite right—the truth is even better!

It turns out rumors that there might be one more woman cast in Star Wars: Episode VII weren’t quite right—the truth is even better! Lucasfilm announced Monday that Academy Award winning actress Lupita Nyong’o and actress Gwendoline Christie will be making the trip to a galaxy far, far away.

It’s been suspected and hoped that Nyong’o, who won an Academy Award for Best Supporting Actress for her role in 12 Years a Slave, would be added to a group of actors that sadly lacked diversity and disappointed fans when initially announced. Nyong’o shared her excitement on Twitter.

I can finally say it out loud and proud: I’m going to a galaxy far far away! https://t.co/b39DjEEAzB

The addition of Gwendoline Christie as well comes as an extremely welcome surprise. Christie plays fan-favorite character Brienne of Tarth on Game of Thrones and also has a role in upcoming film The Hunger Games: Mockingjay Part 2.

“I could not be more excited about Lupita and Gwendoline joining the cast of Episode VII,” Lucasfilm president Kathleen Kennedy said in a statement. “It’s thrilling to see this extraordinarily talented ensemble taking shape.”

With the addition of Nyong’o and Christie, we’ll now have three new women (including actress Daisy Ridley) in the cast. They join Carrie Fisher, returning for her iconic role as Princess Leia. Why Nyong’o and Christie weren’t announced with the initial cast remains unclear. Possibly they’ll have smaller roles than Ridley, but considering the size of their talent, one can hope they’ll still be major players in the film.

While this doesn’t exactly make up for Disney and Star Wars’ missteps recently when it comes diversity in such a classic franchise, it hopefully signals a step in the right direction.