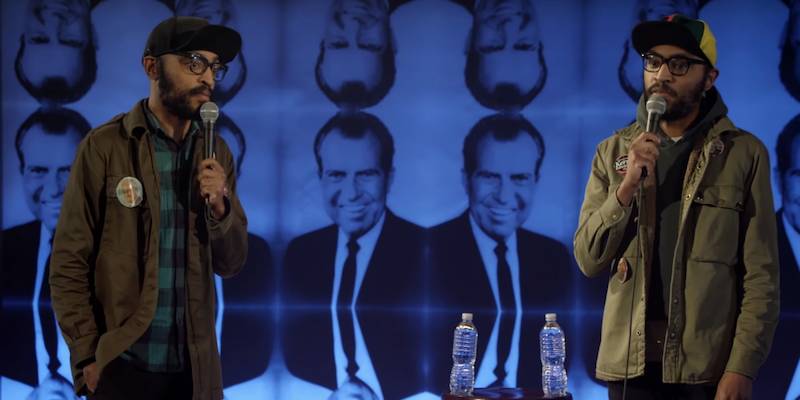 Photo via Netflix US & Canada/YouTube

For the Lucas Brothers, jokes about Nixon's war on drugs are as personal as they are hilarious.

On Drugs, the new Netflix standup special from the Lucas Brothers, begins with a fuck you to a president. No, not that one.

Richard Nixon is the focus of the twin comedians’ opening bit. He’s the first person we see, via an old speech about “America’s public enemy No. 1,” drug abuse. Then comes the mantra: “Fuck Richard Nixon.” As the Lucas brothers take the stage, the joke becomes about how Nixon’s war made it harder for them to get drugs, but Kenny says there were some other parallels.

“Our father went to prison in connection with the war on drugs,” he tells the Daily Dot. “We do a lot of drugs. Just a lot of weird parallels.”

Material about drugs and incarceration makes up a good part of the special, which debuts Tuesday, as the Lucases—who’ve appeared in 22 Jump Street and Lady Dynamite—talk about growing up without their father and how he “overachieved” in prison and got a college degree. (In philosophy.) The brothers were in their early 20s when he was released, but they weren’t doing comedy yet. Law school came first, then they decided collaborating as a comedy duo might be easier.

The Lucas delivery method is something like improv; they’re always yes-anding each other, adding affirmations after delivering a line. That makes the flow of the set more conversational, and applies some dramatic tension to a joke about bringing the movie Scream to a Black Panthers party, and being stopped by a cop with a gun who, it turns out, just wanted a selfie.

“So we took the picture with him,” comes the punchline. “Because he had a gun.”

“We try to talk out the punchlines first,” Kenny says of their writing process. “Then once we have some sort of verbalization, we try it out onstage.”

The brothers didn’t set out to make a political document, but agree there shouldn’t be pressure on comedians to do so.

“I don’t think there are rules,” says Kenny. “It just felt right for us because it was sort of personal. When our father got out of prison, it felt like I owed some sort of responsibility to talk about the negative implications of mass incarceration. I don’t think people individualize it enough. …Particularly comedy, it’s generally like sweeping claims, as opposed to a particular incident that had larger implications.”

Pop culture also is a big thread in the special, and the Lucases list off the shows and comedians that influenced them: Dave Chappelle, Chris Rock, The Simpsons, South Park. The last good movie they saw? Get Out, of course.

The Lucas Brothers take a similar approach with On Drugs: There’s a “black happiness” chart in the special that accounts for “white suffering,” but they’re also just two guys who want to get high (sometimes too high) and roast Nixon. The special ends with an animated Dick, and shows the world if the war on drugs never happened. It works on a couple different levels.