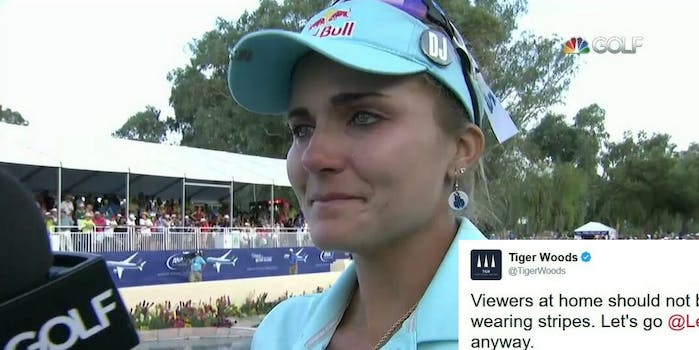 Her colleagues are pissed.

One of the dumbest practices in all of professional sports is that those who watch golf on TV have the ability to call in to the tournament that’s being played and inform officials that a golfer has just broken a rule and should be penalized.

But what happened Sunday was unprecedented when Lexi Thompson lost her lead and probably the championship at the ANA Inspiration, one of the LPGA’s major events, because a TV viewer emailed the tournament to inform it that Thompson had broken a rule. As a result, the tournament levied Thompson with a four-stroke penalty on Sunday for a rule that was broken the day before.

As the Comeback writes:

However, the infraction took place in the third round on Saturday, and Thompson wasn’t even told about the four-stroke penalty until after she completed the 12th hole during Sunday’s final round. A two-shot lead (at 16-under) after the 12th hole immediately turned into a two-shot deficit for Thompson.

Here’s how minor the rule violation was that cost Thompson her major tournament victory.

Lexi Thompson was assessed a 4-shot penalty for an incorrect marking of a ball and signing an incorrect card yesterday at #ANAInspiration pic.twitter.com/6pNJ5haql9

Also, there are plenty of rules officials on the golf course. If they can’t spot a minor infraction like this, it’s beyond silly that the LPGA Tour (and, for that matter, the PGA Tour) would allow viewers—who very well could have personal or financial biases driving their decision—to help police the game.

Plus, she was penalized two strokes for signing an incorrect scorecard on Saturday, even though the tournament itself had no idea she had committed a penalty and nobody knew her scorecard was wrong.

Thompson ended up rallying back to force a sudden-death playoff, but ultimately, she finished in second place.

After all that, what does @Lexi do? Signs autographs and smiles for pictures.

She was emotional yet classy in her post-round interviews, but her fellow professional golfers were pissed.

Viewers at home should not be officials wearing stripes. Let's go @Lexi, win this thing anyway.

Who's watching what is happening to @Lexi @LPGA? Can't believe this is happening. A viewers calls in a rule a day late or ever…. Not right

Whatever number this is that people can call in, it needs to go away. Hoping it doesn't cost @Lexi! https://t.co/wtKkU9pg2o

Unbelievable. Such a shame for @Lexi. The guy eating cheetos at home shouldn't have a say in the outcome. https://t.co/zCxG8apLzH

So Yeon Ryu won the tournament, pocketing a $405,000 payday. As the second-place finisher, Thompson took home about $250,000. That means a viewer email about a tiny rule infraction that nobody else saw probably cost Thompson a major title and $155,000.