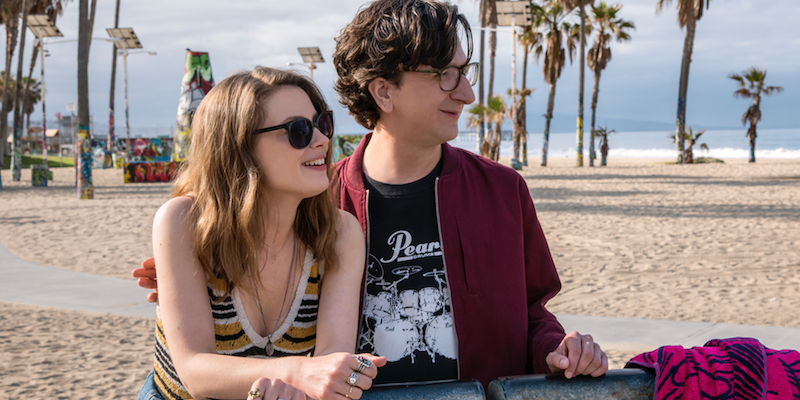 In season 2, ‘Love’ tries to work through its issues

In the first season of Love, Mickey (Gillian Jacobs) and Gus (Paul Rust) have a chance meeting at a convenience store and are tossed into a complicated relation-friendship, where a will-they-won’t-they is quickly established. Season 2 picks up at the same store, but the stakes are a bit higher.

It took a little while for the first season of the Judd Apatow-produced series, created by Rust and wife Lesley Arfin, to open up and get to the core of the story. The first episode of the new season reacquaints us with the situation. Mickey is an addict: drugs, alcohol, sex, and love. She can’t be with anybody, she proclaims, and in the first episode we see them try to dance around her new boundary. By episode 2, it’s gone.

The series, which has already been renewed for season 3, has some higher profile directors this season (Joe Swanberg, Lynn Shelton) and there’s more of a storyline (and more Andy Dick). Like FX’s damaged-people-in-L.A. hit You’re the Worst, the relationship dynamic is at first one of resistance, then casual acceptance. In season 2, Gus and Mickey work toward being each other’s support system, and a couple. Gus helps her throw out her old drugs, but he also has a bit of a savior complex. Mickey still has some manipulative addict tendencies: She urges Gus to take mushrooms while she stays sober, and when he’s impaired, she asks him not to judge if she wants to get high. That episode’s coyote chase and home invasion are a funny detour, but then we’re back to Mickey pushing her boundaries around, and Gus chasing them.

In a later episode, Gus meets Mickey’s dad, played by Daniel Stern. (There are a few other Home Alone references in this season, too.) He blows into town wearing a convincing mix of charm and menace, and we get a little more insight into who she is, and where her issues might come from. Then Mickey lashes out at Gus for trying to help her, and Gus apologizes. (Though sometimes he attacks.) This push-and-pull can get a bit stressful after a while, but it posits that they both have addictions. Season 2 also explores Mickey’s path to recovery in a more compelling way. In one meeting, she says she’s trying not to “binge” on Gus, and I did wonder if this was some sort of subliminal messaging.

When things are good between Gus and Mickey, the show is quite engaging. They have an easy chemistry, and just watching them have a day-long date is satisfying. In episode 5, a conversation about the apocalypse gives a quick character sketch.

“I will not be helpful, I will almost certainly make things worse,” says Mickey.

Claudia O’Doherty is great as Mickey’s roommate Bertie, and her presence yields some of the best human moments. After Mickey opens up about her addictions, Bertie reveals that she “cut up” a dead rabbit once. Mickey confides more in Bertie in season 2, and gets some perspective on her own issues via Bertie’s relationship with cuddly moocher Randy. But it’d be nice to get more of a sense of who Gus and Mickey are independent of each other. Episode 3 comes closest, as we see them interact with their co-workers and try to put out fires in other people’s lives.

Compared with Netflix original rom-coms like Easy and Master of None, Love has an easier rhythm; you start to get comfortable with Gus and Mickey, even though you know an earthquake is coming. You root for them to transcend their issues, and also to fall back into them. Why do we enjoy watching damaged people in unhealthy situations? There’s a handful of current shows trying to answer that question, but Love makes the viewer ask some questions about themselves, too.