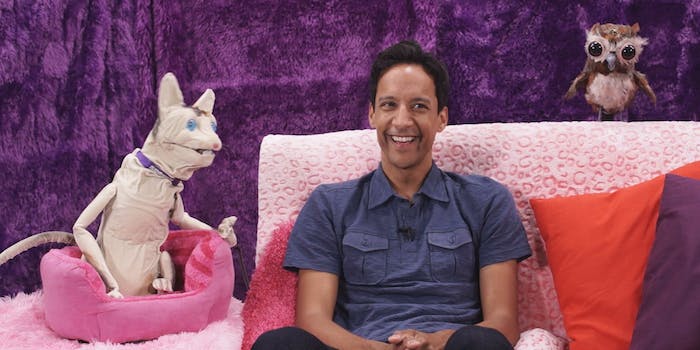 Here's what happens when you put the co-executive producer of The Big Bang Theory with a Community writer together on YouTube.

Eric Kaplan’s running a bit behind for our interview. He was called into a “light” script rewrite for the show he co-executive produces, The Big Bang Theory, which is heading into its seventh season. Over the summer, he’s also been busy creating a new YouTube series, Love Me Cat, in which a needy, hairless cat puppet, voiced by Kaplan, works out existential issues as the host of his own Internet talk show.

“I liked the idea of a character that was upfront about his need for love,” Kaplan told the Daily Dot. “How can I get people to love me? There’s this thing about love in the primal sense. Say you’re in a tribe, and no one shares their food with you. You could die. So we need that love.

“But [Love Me Cat] is hideous; he has no hair. So he’s using YouTube to reach out for advice.”

The weekly series is on My Damn Channel, an expanding comedy network on YouTube, which is home to Daily Grace and Hipsterhood. Earlier this year, MDC’s cofounder, Warren Chao, asked Kaplan if he’d want to do a show. The idea for Love Me Cat came together, and Kaplan asked some friends in the TV industry to help out. In late May, they took to Kickstarter to fund production and create the cast of puppets. After reaching the goal of $20,000 in late June, the show debuted on My Damn Channel in early August.

Alongside Love Me Cat is Owly, his owl co-host, voiced by Community writer Andy Bobrow. There’s also Bronzo, the social media robot and house band, voiced by Matt Selman (The Simpsons), and a sheep named Sheepy (Haley Mancini from The Morning After), who plays the bleating audience of one. Andy Richter and Community’s Danny Pudi have already appeared as guests; Big Bang’s Mayim Bialik, Buffy the Vampire Slayer’s Emma Caulfield, and a handful of My Damn Channel vloggers are scheduled for couch time. Matt Chapman, of Spongebob Squarepants in China fame, directs.

Kaplan, who’s also written for Late Show with David Letterman, Futurama, and Malcolm in the Middle, had the talk show concept in mind from the very beginning. The cat and owl relationship, once the subject of a poem by Edward Lear, parallels the classic late-night talk show host/co-host dynamic, too. In the show’s opening credits, Love Me Cat is announced not as your host, but “your embodied request for affection.”

“Love Me Cat is obsessed with himself,” Kaplan said. “Owly is smarter than he is, and provides framing for his ego. … [In Lear’s poem], the owl and cat are lovers. Love Me Cat and Owly are not. But they both eat mice.”

According to Kaplan, Love Me Cat is only a year old, but he asks enough questions for nine lives. In one clip, he poses an ethics question to Pudi, positing that some of us might consider ethics “to be a trap for the weak.” In another clip, Richter tells a story about Amy Sedaris and 9/11, and Bronzo lands the punchline in a way that certainly wouldn’t fly on prime time. When asked if he’s a fan of Pee-Wee’s Playhouse, which shares a few aesthetic themes with Love Me Cat, Kaplan cites the New Jersey variety program The Uncle Floyd Show, which he watched as a kid, as more of an inspiration.

Beyond its narcissistic and philosophical themes, Love Me Cat is improvised. That script-free environment, where he and his animator/comedy writer colleagues are free to ebb and flow, is appealing to Kaplan:

“There’s something a bit uptight about writing a script, sitting there concentrating to make it right, changing it, worrying people won’t like it. It’s fun to be more in the moment.”

With that in mind, Kaplan explains they’re aiming for 100 or more shows this year, and upcoming episodes will feature interviews with a rabbi, a banana, and Big Bang’s Johnny Galecki. (He doesn’t mention if they walk into a bar together.) And while Big Bang and Community fans will find something to love in the show’s sly humor and inside jokes, Love Me Cat operates in an alternate reality, where we’re all just clawing at a scratching post, looking for answers.

“It’s an adjacent reality,” Kaplan adds. “Adjacent to our own reality. Both realities have Andy Richter.”

Photo courtesy of My Damn Channel