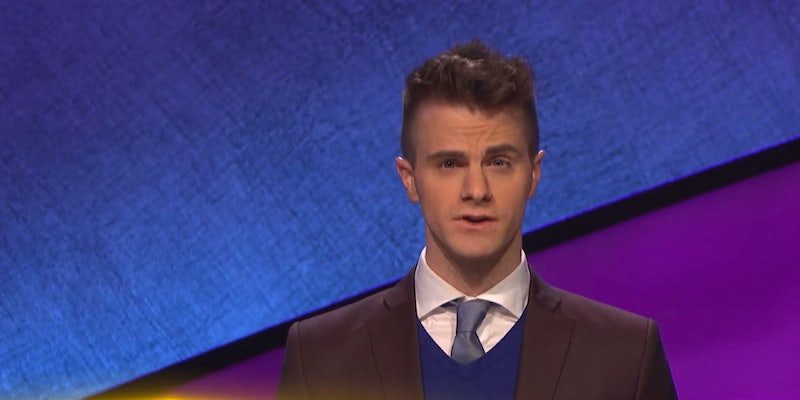 ‘Jeopardy’ contestant has the perfect way to celebrate a right answer

He got a 'Double Jeopardy' question right. Of course he's going to celebrate.

Unless you’re a Jeopardy contestant along the lines of Ken Jennings or Arthur Chu, you might only have a few shows at most to make any sort of impression on the audience. But some of them make it count.

Hitfix writer Louis Virtel appeared on the May 8 episode of Jeopardy. And although he didn’t win his show, he managed to put some real flair when getting a “Double Jeopardy” question about Arthur Miller correct. You’d be that excited too if you answered something correctly that you vaguely remember from High School English.

Virtel, who’s been a Jeopardy fan his whole life, wrote about his experience on the show. Although he doesn’t regret playing at all, his one regret is about what he didn’t say: He never explicitly stated that he was gay, although he did demonstrate some subtleties, such as the now-viral snap.

“As a kid growing up in the suburbs who venerated everything about Jeopardy, I would’ve loved seeing an expressive gay contestant own his homosexuality as well as the buzzer,” Virtel wrote. “I’ll never get that chance again, but I take some comfort in having exhibited my sexual orientation through a few glaring clues. It just annoys me to settle for illustration when the correct response to heteronormativity is blatant acknowledgment of my own reality.”

While the episode aired, however, he dished out a burn to one of the viewers who took issue with him being on the show.