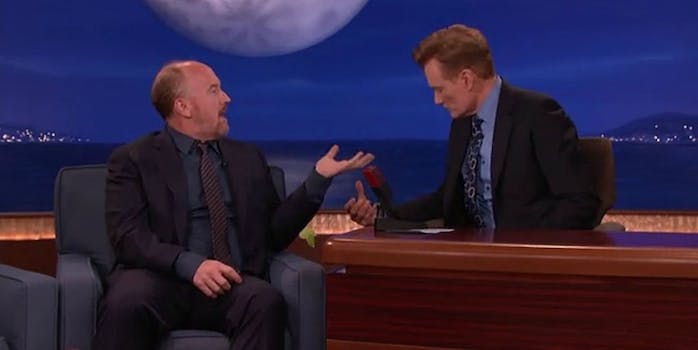 He gave his daughter permission to lock him out of his phone.

While Louis C.K. just made a groundbreaking series for his website, he’s also been happy to talk about why he quit Twitter in 2015.

But on Conan Thursday night, C.K. took it a step further, telling the show’s host that he simply didn’t like being distracted by the Internet on his phone when he was supposed to be spending time with his kids.

So, for the past month, C.K. said he’s quit the Internet.

This is what C.K. said on The Opie Show when he originally quit Twitter: “It didn’t make me feel good. It made me feel bad instead. So I stopped doing it.”

Two emails to C.K.’s website were not immediately answered at press time regarding what this self-imposed hiatus means for his booming listserv.

In plenty of ways, C.K.’s reasons for quitting the Internet mirror his explanation on why he got off Twitter. But it sounds like this particular rationale was even more personal.

Ah, the things we do for our kids.