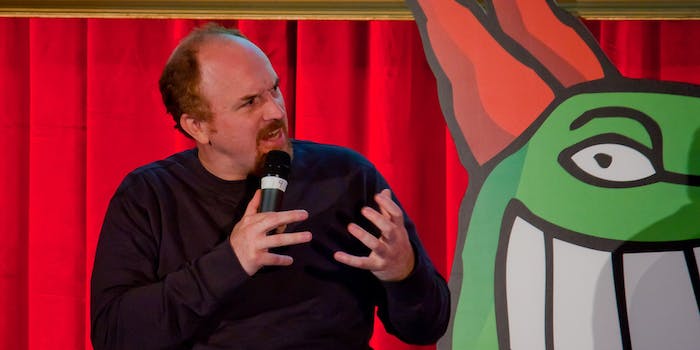 The actor and director are appealing to TMZ to take the video of Tracy Morgan's car crash off the site.

Louis C.K. and Judd Apatow are pleading with TMZ to remove video on its website showing the aftermath of a major car accident that killed comedian James McNair and injured Tracy Morgan and three others.

The video, reportedly shot by a passing driver early Saturday morning after the six-car crash happened on the New Jersey Turnpike, shows the limo bus on its side while one of the passengers is pulled from the wreckage.

Ardie Fuqua, one of the other comedians injured in the crash with Morgan, is said to be the person removed from the crash in the video, according to his daughter Krizya.

She called for TMZ to remove the video.

“I need help to get TMZ to remove the video of the accident that shows my dad being pulled from the truck and laid down to the side,” she wrote in an Instagram post. “This something no one should ever see, it’s hurtful and distasteful.”

Now, C.K. has come out in support of Krizya, after TMZ refused to take down the video, and sent multiple tweets to the notorious celebrity news site.

Arte’s brave daughter asked them to take it down. They won’t.

Please don’t go to TMZ to watch the video. Please ask them to take it down. @TMZ

Shortly after, Apatow joined in to support Krizya as well.

The video has yet to be removed from TMZ’s website.

Morgan is still in critical condition with several broken bones and will likely remain hospitalized for several weeks. Kevin Roper, who drove the truck that crashed into Morgan’s limousine, has been charged with vehicular homicide and four counts of assault by auto.