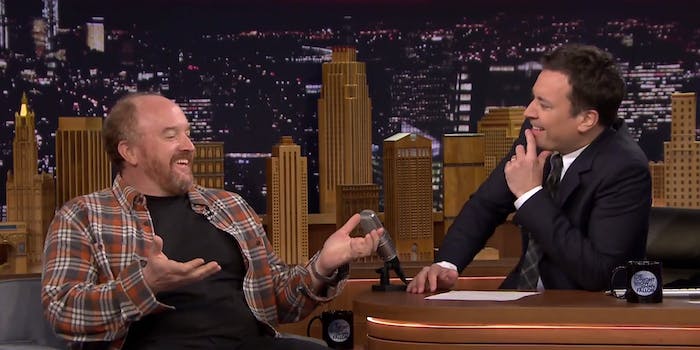 Louis C.K. tells Jimmy Fallon how he tried to sabotage his career

Louis C.K. knew it was a messed up thing to do, and he did it anyway.

Nearly 20 years after it happened, Louis C.K. revealed that he ruined one of Jimmy Fallon’s auditions with a crazy story that could probably be its own episode of Louie.

Fallon was up for a role on The Dana Carvey Show back in the 1990s, and C.K. was the show’s lead writer. From the moment Fallon stepped onstage with a guitar and some troll dolls, the comedian despised him. Everything Fallon did annoyed him, and although the women on staff loved him, he threatened to quit if Fallon got hired.

“I was dead against you,” C.K. told Fallon on The Tonight Show. “Yes, because you had all your hair, you were in shape, you were a  young kid, and I was just already kinda just sweaty and balding and I was depressed and it was pure jealousy.”

C.K. may have crushed Fallon’s dreams, but considering that The Dana Carvey Show got canceled after seven episodes, it ended up working out for Fallon anyway. So thanks for that, Louis C.K.!