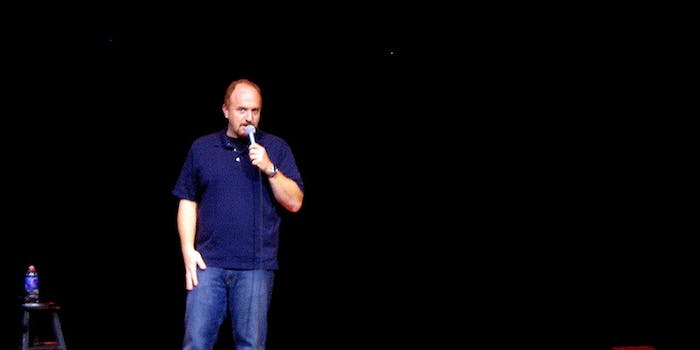 Who needs distributors when you've got the Internet and a million fans?

Aside from his own specials and TV series, comedian Louis C.K.’s best-known directorial credit is for the resoundingly odd 2001 cult film Pootie Tang. But three years before that, he brought a debut feature, Tomorrow Night—starring Amy Poehler, Conan O’Brien, and Steve Carell—to Sundance. “Nobody wanted it,” C.K. explained in a Daily Show interview last night. So he stuck it on the shelf.

Now, of course, C.K. enjoys a bit more mainstream cred and could probably find a distributor in no time—that’s just not his style. At noon today, you’ll be able to buy the 1998 movie through his website for $5, or, if you’re really cheap, download it for free when it pops up on torrent sites a few minutes later. Either way, we’re excited to see what our favorite funny people were up to back when the idea of purchasing or pirating stuff online was in its infancy. (R.I.P., Napster.)

The black-and-white comedy, shot on 16 mm film, had financing from the Daily Show’s Jon Stewart, who was captivated by the story of “a guy who gets sexual gratification from a bowl of ice cream.”

Still, C.K. had to dig deep to get the thing made: “All the money I had I put into it, and some I didn’t and I did a few illegal things to get it done,” he said. All the parts were written with specific actors in mind, including beloved comics J.B. Smoove, Robert Smigel, Wanda Sykes, and Todd Barry. “Nothing makes much sense,” C.K. warned, “but the performances are great.”

You can watch a scene in the first of the two clips below: Carell and Smigel, both of whom C.K. worked with on the now-legendary but short-lived Dana Carvey Show, struggle to contain their giggling as they carry out a childish prank phone call. Luckily, you are free to laugh yourself.