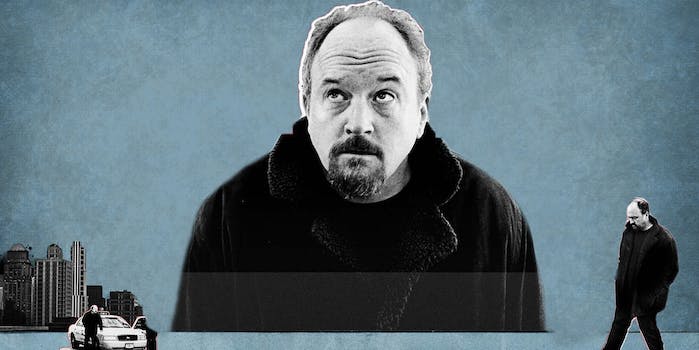 Louis C.K., parenthood, and the art of the standup confession

Louie, FX’s tiny-budget hit, returns for its fifth season April 9. The show has been praised for its unflinching examination of all the ups and (more often than not) downs that make up life, and it’s struck a very relatable chord with viewers.

Louis C.K.—creator, writer, director, editor, and star of the show—began his career as a standup comedian in the ’80s. He worked with fair success for many years, but parenthood opened up his act considerably. For a standup comic, all life events are fair game. Childhood, marriage, what your idiot friend said that one time: All are kindling for the observation and analysis that makes a joke a joke.

Until parenthood, every relationship we have is mutually consented to. Our parents chose to have/raise us and our friends and spouses aren’t assigned. But when you have a kid, you become responsible for the welfare and happiness of something outside yourself. It’s a whole new ballgame.

Here’s a look at how parenthood affected C.K.’s work.

Honesty is a comedian’s medium. Comedy is about truth and accessing universalities by heightening them to absurd levels.

Having a kid made C.K. joke more about who he is, rather than what he sees, does, and thinks. The focus of an early bit about naming children is wholly outward. His child named “Ladies and Gentlemen” is fictional and doesn’t cause the comedian to do any soul-searching.

My 5-year-old, the other day one of her toys broke and she demanded that I break her sister’s toy to make it fair. And I did. That’s how much shit she gave me. I broke the little toy. And I felt awful. I felt like crying. And I look at her and she’s got this creepy smile.

Here, C.K. is confronting what it means to bring up a child. We all have a different set of experiences based on choices our parents made and continue to make, and most of us are just doing our best. Sure, C.K. is telling a story about his daughter, but he’s really admitting something about himself, knowing that other parents will relate.

Laughter is one of the communal phenomena that comes with consciousness. Hearing C.K. confess imperfection and failure creates a sense of joy and unity between artist and audience, and it’s expressed physiologically. A parent is linked forever with the child, and every action taken ripples down to the new life, so how these artists continue their careers can’t help but affect their children. Every comedian-turned-parent has to decide how they are going to deal with this new relationship in full view of all who care to watch.

Laughter is knowledge. Comedy is intimacy. Art is confession.

A common theme in C.K.’s work is the difference between adults and children. He knows he can’t talk to his kids as he would an adult. In season 2, he flips off his younger daughter Jane after she says some incredibly hurtful shit to him. And in his 2007 special Shameless, he tells a pretty terrible story that addresses the same thing. What C.K. is doing when he “calls out” his daughter is discussing the differences between how we talk to adults and children:

She’s a girl. She’s 4, and she’s also a fucking asshole. It’s true. I say that with no remorse… She says, ‘Mama I saw a doggie today,’ and I was like, ‘Really, where did you see a doggie?’ and she says, ‘I’m telling mama, not you,’ and I’m like, ‘Fuck you! I’m just asking to be nice anyway. You think I actually give a shit about the dog you saw? Like that was gonna be an awesome story, that you saw a fucking dog? Who gives a shit? I’ve got better stories than you. I’ve got an interesting life. I’m on fucking television. I won an Emmy. You don’t ask me what fucking happened to me today, you little bitch.’ I didn’t say that to her, obviously, but that’s the thing, nobody ever calls her on her bullshit. That’s how she got to be an asshole in the first place.

Children grow up, and it’s the job of the parent to prepare them for the harsh realities of the real world. In a season 4 episode of Louie, C.K.’s younger daughter steps off a subway car just as the doors close, separating her from her father and sister. When he finds her, he screams:

“People get hurt, it’s a dangerous world… bad things happen… go ahead and cry, that’s what you should be doing. You should be scared and crying.”

Season 4 saw his daughters become more prominent characters. The older they get, the less they’re aliens to their father, and the more he can relate to their experiences. In the two-part episode “In the Woods,” C.K. catches his older daughter Lily smoking pot. The episodes are both mainly flashbacks, ending with C.K. telling his 12-year-old daughter, “Goodbye to childhood.”

Now that his children are having adult experiences to which he can relate, the artist is forced to consider his own choices.

C.K.’s early work tended toward the absurd. Looking back, bits like “dolphin jokes” and his impression of a superhero being propositioned by a hooker almost seem to belong to another comedian. His work has become more grounded, but it’s never let go of the absurdity of life.

Much of season 4 is threatened by a looming hurricane. The news coverage is over the top, especially for a show built on realism. The storm is reported to have obliterated Cuba and killed LeBron James, and in these moments, C.K. is exploring the surreality of the real. It is C.K.’s brutal honesty and simultaneous admiration of the absurd that makes him such a compelling artist.

We all vent from time to time, but standup comedians do it in public. It’s no wonder that some of the Internet’s most beloved celebrities are comedians: The 21st century is all about oversharing. Art is representation, and representation is not the real.

In the season 4 episode “Elevator Part 3,” his daughter Jane asks him a few questions:

Jane: Am I easy to be around?

Louie: Yeah, you really are… it’s like my fourth favorite thing.

Jane: What are the first three?

Louie: Number three, riding elephants. Number two, collecting hydrogen… And number one would have to be remembering being with you.”

Experiencing is just that; remembering is processing and understanding. Remembering the action is more powerful than the action because it has been subject to interpretation and processing. Creating life gave C.K. a new understanding of himself, and this new understanding lit a fire under his career. His is the creativity born of the desire to positively connect with the world—and the fear that it is impossible.