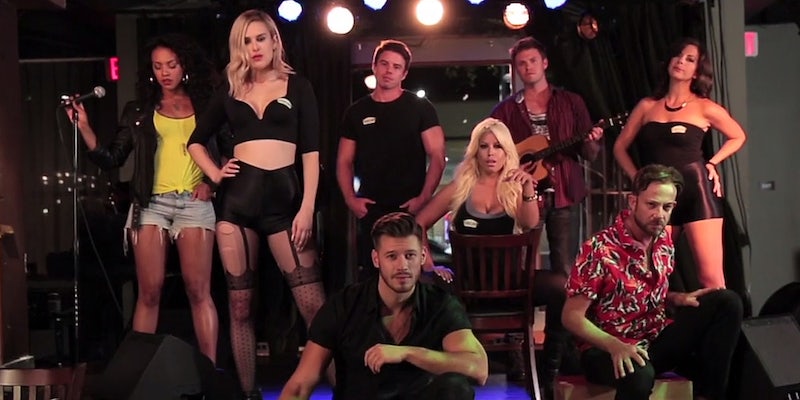 You may think things are tumultuous among the teenage elite of a certain notorious California ZIP code, but the real drama is happening across town with the employees and patrons of Los Feliz theater Rockwell Table & Stage.

Los Feliz, 90027 follows the exploits of the fictional waiters, performers, and guests of an actual Los Angeles establishment, blending the worlds of live performance and filmed storytelling in an innovative new format. Jake Wilson, the show’s creator—who also helmed iconic webseries like The Battery’s Down—came up with the idea after Rockwell offered him his own monthly live show about anything he wanted.

“I came from a Broadway background, but these days I’m doing primarily TV and film, so I didn’t have an interest in a live show,” Wilson told the Daily Dot. “I thought, ‘What would be interesting to me? What would still work toward my goal of doing TV and film?’ I figured if they gave me a free venue every month, I could premiere new filmed footage in front of a live audience and see how it lands. Jumping off that idea, I figured it can’t be all filmed footage. I decided to do half filmed and half live, which has never been done before, not truly like this. For example, in the pilot episode, it starts outside. In the [online] version, we reshot it without an audience, but at Rockwell you see it live. When that character enters, that happens in front of a full live audience, a seamless transition from the projector screen.”

Unlike many other webseries properties, Wilson opted for a longer format to match the live show atmosphere as well as the new demand for digital long-form content.

“I don’t even have cable, and I watch so much TV,” Wilson explained. “But I watch everything online, on demand. Long-form versus short-form isn’t a delineation that matters to me. You look at these Netflix series and these Amazon series, things you can only get online but they’re still long. People are more willing to binge-watch long stuff. Also because it’s a live show, we need it to be long enough for people to buy a ticket. It has to be at least an hour long, and it doesn’t make sense to split that up into 10 parts for online.”

However, to produce that kind of content takes funds. Wilson wrote the show in part to help his talented friends whom he felt were currently underutilized, but he soon learned that pulling free favors in L.A. was very different from his previous home base of New York, where he said he knew tons of friends who would help run sound out of the goodness of their hearts.

“I definitely considered the option of pitching this show out to Hulu or those types of production platforms, but I know that the nudity angle and the music angle would be pretty constricting,” he said. “I know people would be polarized that we show pornography in every episode, but sex sells.”

Taking matters into their own hands, the team behind Los Feliz, 90027 launched a Kickstarter with just two short weeks to hit an ambitious goal of $45,000. So far the tally is sitting well below that, but Wilson is optimistic.

“The idea that we wouldn’t be able to do any more episodes is a sad thing,” he said. “I think our cast is phenomenal, and there are so many things that are unique. We haven’t truly gotten it out there—even the first episode. I didn’t want to super publicize it knowing there wasn’t a second episode to follow it yet.”

They’re poised and ready to move forward if they meet their goal. Wilson already set up a writer’s room and finished the second and third episodes.

“I’m a pretty ambitious guy, and I didn’t realize how ambitious it was of an undertaking,” he said. “We originally had shows planned for five months, but after those first shows we realized we couldn’t keep going at that rate. In order to do it right, we have to get the money.”

Screengrab via The Battery Co./Vimeo