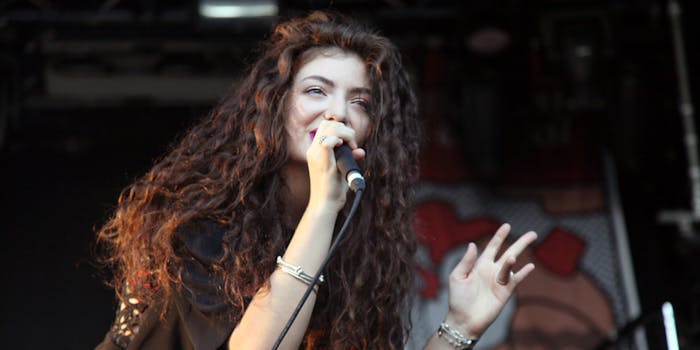 Lorde takes the reins of the ‘Hunger Games: Mockingjay’ soundtrack

something exciting is about to happen

The singer’s tweet sent social media into a frenzy. What could the announcement be? The much anticipated follow up to her debut LP? The revelation that she is in fact, 33 years old? No, something far better.

On Thursday morning, the New Zealand native informed the Twittersphere that not only would she be creating the lead single for the new installment in the Hunger Games franchise, but she would also be curating the soundtrack for Mockingjay — Part 1. The news comes hot on the heels of the release of the first official trailer for the film, set to debut in November 2014.

building this thing piece by piece has been amazing. i can’t wait to share the other artists’ contributions with you. http://t.co/mlZdIDy8Kd

With the previous soundtracks garnering big-name talents like Taylor Swift, Coldplay, Arcade Fire, and Sia, what can we expect from Lorde’s turn as musical curator? She’s not dropped any names yet, but we’re hoping for big things. She said in a news release:

The cast and story are an inspiration for all musicians participating and, as someone with cinematic leanings, being privy to a different creative process has been a unique experience. I think the soundtrack is definitely going to surprise people.

She did satiate hungry fans, no pun intended, with a morsel of good news. She wrote the lead single with frequent collaborator Joel Little, the producer responsible for her Grammy-nominated album, Pure Heroine.

oh, and @iamjoellittle and i wrote the first single. so be ready.

So get your three-finger salute in the air, because this fall Panem is gonna be rocking.