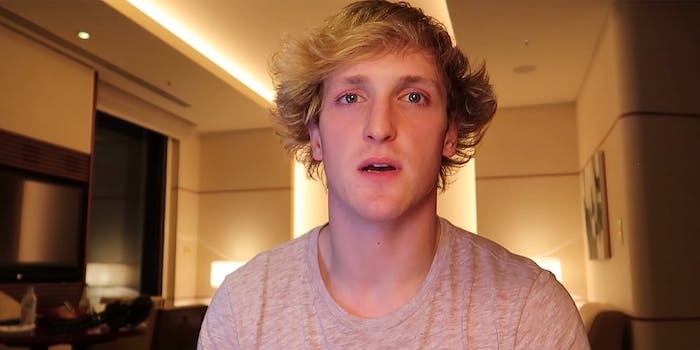 On YouTube, reaction videos can be a cheap fix. Or worse.

“Logan Paul Just Ended His Career,” read one. “The LOGAN PAUL Suicide Forest Video – IS IT REAL???” read another.

YouTube’s reaction videos are a huge part of the platform’s ecosystem. It’s how YouTubers address interpersonal drama, and channels like the Fine Brothers have made a lucrative industry out of reaction videos. Paul’s videos are often reaction videos—the Japan one certainly was. We saw his reaction to seeing a dead body in real time, and struggle with a response. His devoted fans (dubbed the Logang) want that. A search for “Logan Paul reaction videos” yields more than 9 million results, but the top results are about Japan.

There’s a formulaic look to reaction videos: Lots of all caps in the title, a clicky thumbnail. Often the titles are just a string of keywords that pleases the easily gamed YouTube algorithm. And so YouTube pushes them out and we get a glut of videos about suicide. It’s hard to tell which ones are sincere and which are exploitative.

The video—and the reactions to it, and YouTube’s passive handling of it—show that conversation around suicide is still one that needs work. Many of these reaction videos offer thoughts about the seriousness of suicide and links to prevention resources. Some popular channels like Eh Bee Family noted that ad revenue from their reaction video would be donated to the American Foundation for Suicide Prevention.

But all these reactions cast a morbid glare that might obscure any real, honest dialogue about suicide. In many cases, vloggers are using re-uploaded footage from the original video. Some are calling the video a fake, likely for clicks, but that further discounts those actually struggling with suicidal thoughts.

And now the world is rushing over to YouTube to watch reaction videos and critical commentary on the Logan Paul video while Google cashes in even more. Win/win. There’s no accountability.

I don't wanna weigh in on the whole Logan Paul debacle, he's not worth the words, but I sure hope everyone putting out reaction videos are donating any money earned from it to suicide prevention and not just ALSO profiting off the outrage. Actions speak louder than words.

As Ana Valens writes, there are plenty of places online to indulge morbidity, and there were before YouTube. However:

By publishing a vlog that builds up “suspense” to the body’s reveal and its impact on the Americans visiting Aokigahara, Paul turned suicidal people’s struggles into a spectacle. His video fosters the stigma around suicide by making suicidal thoughts and behaviors into something obscene, instead of a sign that society needs better ways to help people seek out the support they need.

Mia Findlay, a mental health advocate who runs the channel What Mia Did Next, says she’s been “encouraged by the respectful and sensitive discourse around mental illness and suicide this week.” Her channel focuses on eating disorders, mental health, and recovery, and she notes she doesn’t typically do reaction videos, but “was compelled to say something because I know all too well the impact of the video Logan put out on those who have attempted suicide or lost someone to suicide, which was reflected back to me by my audience. I wanted to reinforce that their pain and loss is not a laughing matter and to encourage them to seek help should they need it.

“Because YouTube fails to hold their big earners accountable and even promotes their poor choices, creators are left to police each other and fill the gap when YouTube refuses to act. YouTubers holding each other accountable is the only system of checks and balances which remains on what is now a very flawed platform.”

Even more troubling, Findlay says that her videos are often flagged are soon as they’re posted, and that other mental health-focused YouTubers have had a similar experience.

“They don’t contain salacious, offensive, or dangerous content,” she says, “but every single video is flagged. Eating disorders kill more people than any other mental illness and I am punished for trying to reach those who are suffering, whilst Logan is rewarded and promoted by YouTube for violating and mocking a victim of suicide. Long story short, something is very wrong with YouTube.”