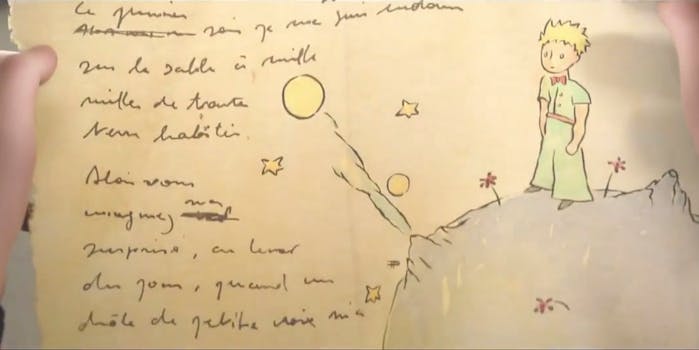 Reach for your bookshelf with one hand and a tissue box with the other.

The Little Prince, Antoine de Saint-Exupéry’s classic story about a lost intergalactic space traveler, is beloved worldwide for its whimsical illustrations, its poignant philosophical reflections on life, and its eerie blend of sadness, cynicism, and joy.

That’s a whole lot to pack into a film adaptation, but if the just-released French trailer is any indication, the all-star production team has done its best to make the movie live up to the impossibly high expectations of children of all ages.

The Little Prince movie is something of an anomaly. Produced independently by Leonardo DiCaprio and directed by Kung Fu Panda‘s Mark Osborne, the animated film features an all-star voice cast including Marion Cotillard, James Franco, and Jeff Bridges. The trailer has a bit of Where the Wild Things Are about it, but we think the animated renditions of Saint-Exupéry’s famed illustrations show infinitely more promise than CGI versions of Maurice Sendak’s monsters.

Or maybe we’re just swayed by the appropriateness of “Somewhere Only We Know” as the trailer soundtrack?

Paramount will distribute the film in the U.S. and France. Although there’s no U.S. release date yet, if you’re in France, you can look forward to seeing it next October.

Then you can spend the rest of the month wondering if you’re a “bowler hat” person or a “boa constrictor swallowing an elephant” person.