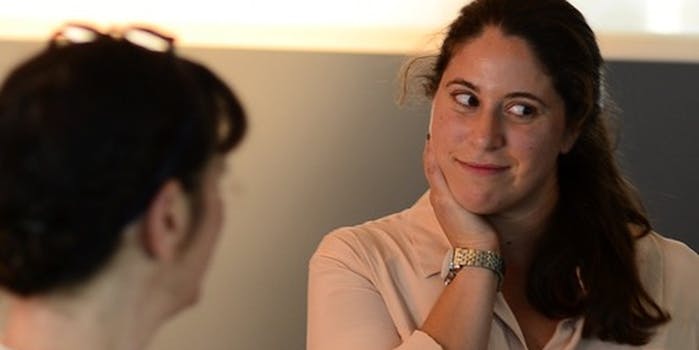 “Little Horribles” is more than just a lesbian “Girls”

“This is the best webseries I’ve ever seen, and I’ve only seen five minutes of it,” was YouTube user TheBermuda’s response to the newly launched Little Horribles, a comedy about queer women and dating relationships.

Produced by Awkward Black Girl‘s Issa Rae (who has a cameo in Episode 1), Little Horribles carries the same brand of deadpan humor, moments of social awkwardness, and hilarious misunderstandings. Rae also helped promote the endeavor to her hundred thousand followers.

But the real star of Little Horribles is its creator, writer, sometimes-director, and star, Amy Rubin. Her character, also named Amy, is a thirty-something lesbian attempting to navigate the muddy waters of dating and relationships in Los Angeles. As the show’s website puts it:

Hailed as the “Lesbian Girls” (by some lesbians in Silverlake) the show rips apart and laughs in the face of those painfully uncomfortable moments that no one wants to remember, but everyone does.

Little Horribles isn’t the first webseries to find success recently for looking at queer relationships. This year’s EastSiders also gained critical acclaim for its just-wrapped first season. Like EastSiders, Little Horribles is set in Los Angeles’ queer-friendly Silver Lake neighborhood.  But unlike EastSiders, Little Horribles has a small-town community vibe, a kind of “Hey, gang! Let’s put on a webseries!” feel, whether it’s from the “everyone pitched in to help” cast and crew listings, or the way the production embraces its impromptu style.

It’s also refreshing to see Rubin baring her skin in ways that aren’t glorified for the camera or presented as anything but a real woman with a real body who just happens to be walking around half-naked.

Rubin’s production company, Barnacle Media, most often does public service announcements for political action groups and other organizations. But so far the only political overtones in Little Horribles are in its representation. While it has no problem piggy-backing on the comedic style of Girls for comparison’s sake, it’s already got a more diverse cast than Girls.

There will be plenty of time to draw more comparisons between Little Horribles and that thing you love. But for now, with only one episode out, you can just enjoy the comedy.