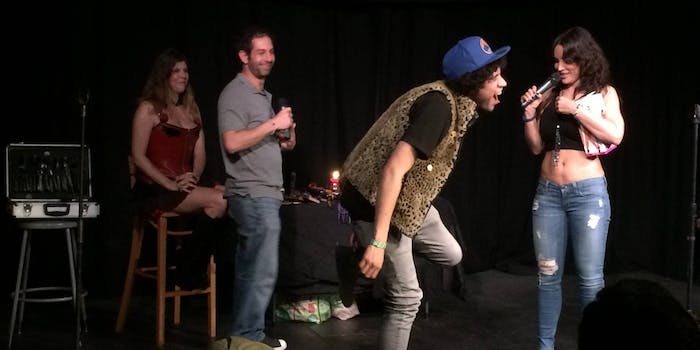 “I don’t suppose any of these is a back rub,” he says.

Not a chance. McClory’s jokes failed to win over an intimate crowd of about 90 downtown at the Hideout Theatre late Sunday, and now he must unbutton his dress shirt and be lightly electrocuted with Blaise’s prod. The audience-selected safe word is “Okeechobee.”

(Disclosure: I went to high school with McClory, and while we’re longtime Facebook friends, have not interacted with the dude in more than 10 years.)

To his credit, he gets through a solid 20 seconds of zaps with minimal wincing. Nog told the Daily Dot that the plan is to eventually format this for TV, but for now it’s just a theater road show. Despite clear warnings to not film the actual standup sets—lest the jokes in progress from guest headliners Todd Glass and Andrew Santino be compromised—Nog encourages uploading pics and tagging @PaidorPain on Twitter. Chunks of the two-hour event are livestreamed on Periscope. As the occasion’s real draw, she’s prepared for lewd questions and shuts down loudmouths. A heckler is greeted with a nice quip about his penis size.

“I don’t really have sex with fruit that often,” Ann says coolly when asked to list produce she finds most sexy.

“Don’t ask if you can have sex with me or how much it costs to have sex with me,” she tells the Hideout’s collective of mostly standalone, badge-donning dudes who broke away from their companies’ networking socials. (I’m certain many of them told their boss they were calling it an early night.)

“You should buy one because you’ll love it,” Ann says about the virtues of her replica Fleshlights. It’s an online age of sex-positive empowerment for women celebrities. Earlier at SXSW, over at Lucille’s on Rainey Streey, Instagram hero Amber Rose was introduced first and foremost as a “neo-feminist.” And now a 43-year-old retiree is hosting a variety hour where bad comedy (here exclusively from white men) gets a spanking.