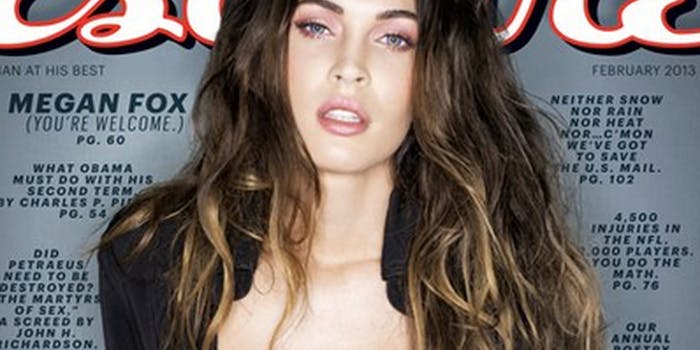 Fox says her comparison of Lindsay Lohan and Marilyn Monroe in an Esquire interview was meant to be more flattering than it sounded.

In an effort to avoid World War III, Megan Fox is now clarifying comments she made about Lindsay Lohan.

Fox posted to her Facebook page late Tuesday explaining a reference she made about Lindsay Lohan in an upcoming issue of Esquire. The Transformer star said her now-removed tattoo of Marilyn Monroe reminded her a lot of Lohan.

“She was an actress who wasn’t reliable, who almost wasn’t insurable,” said Fox to the men’s magazine according to D-Listed. “She had all the potential in the world, and it was squandered.”

Welp, she’s now taking that back before it “snowballs into something silly.” Calling Monroe a “powerful and iconic figure for women,” Fox said her parallel between the former bombshell and Lohan was meant with the best intentions.

I attempted to draw parallels between Lindsay and Marilyn in order to illustrate my point that while Marilyn may be an icon now, sadly she was not respected and taken seriously while she was still living.

Both women were gifted actresses, whose natural talent was lost amongst the chaos and incessant media scrutiny surrounding their lifestyles and their difficulties adhering to studio schedules etc.

I intended for this to be a factual comparison of two women with similar experiences in Hollywood. Unfortunately it turned into me offering up what is really much more of an uneducated opinion.

The Twitter quitter ended her note saying it wasn’t her intention to “criticize or degrade” Lohan.

Glad we got this settled.