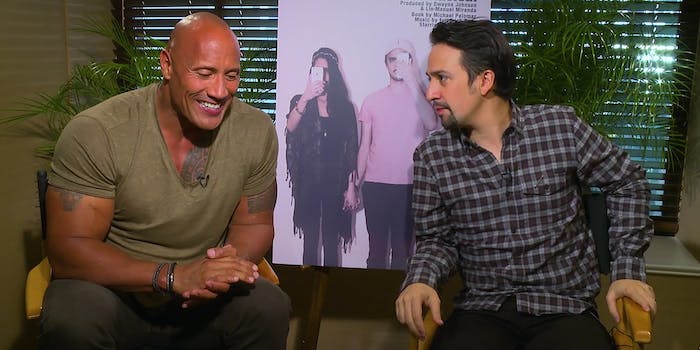 Love, not always a swipe away.

Now that Lin-Manuel Miranda has revolutionized what we think about the Founding Fathers in Hamilton, he’s set his sights on another group of people plenty of preconceived notions about: millennials.

Fresh off his collaboration with the Rock in Moana, they’ve come together for Millennials: The Musical—the next big show to hit the Richard Rodgers Theater for the Rock’s YouTube channel. Satirical and heartfelt, it pokes fun at millennials at their core—and features some incredible rap performances—while embodying the highs and lows of a 22-year-old millennial working at a startup in Brooklyn.

We wouldn’t want to ruin the love story at the end, but Crystal definitely would have had Find my Phone installed on her phone from the start, right?

And while this is much better than it should be, we’re definitely looking forward to Miranda and the Rock’s next masterpiece, a heartwarming musical about the underdog rise of their favorite spot, Chipotle. As Miranda says, “The guacamole is extra but the love is free.”