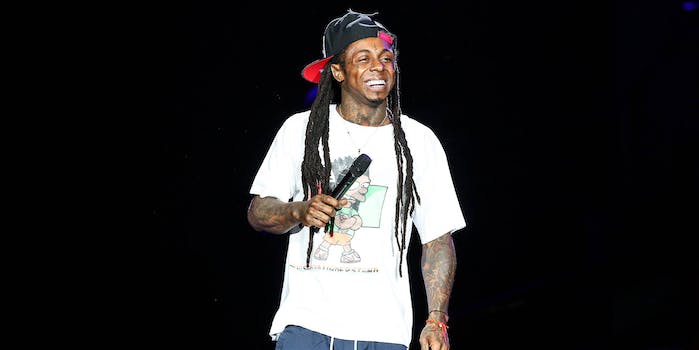 Lil Wayne may have just retired from music on Twitter

Lil Wayne's Twitter has fans wondering if he's stepping away from music.

On Saturday morning, hip hop fans woke up to a shocking series of tweets from Lil Wayne. Something was not right.

For one, Lil Wayne had been increasingly unhappy with his label. Celebrating his second annual Lil Weezyana Fest in his hometown of New Orleans, Weezy said he had three words for Birdman and his former friends: Fuck Cash Money.

Lil Weezyana marked a major victory for the artist, serving as a way to showcase local musicians as well as his latest collaborations with 2 Chainz. The rappers released the collaborative album Collegrove in March, credited only 2 Chainz due to Weezy’s ongoing label disputes with Cash Money.

Could this be what led to Lil Wayne’s early morning tweet?

The message was especially troubling considering a Friday afternoon hoax in which cops were called to Weezy’s Miami Beach home. Officers responded to reports of a shooting only to discover no issues whatsoever. Lil Wayne and the MBPD exchanged pleasantries online and that was that.

Luv to the miami PD for always being alert, attentive, & appropriate. Thk u

Our pleasure @LilTunechi, glad you're ok and thanks for supporting our guys! https://t.co/RQd05WcsA8

In terms of danger, Lil Wayne’s early Saturday morning tweet proved to once again be a false alarm.

It’s worth mentioning that the rapper born Dwayne Michael Carter, Jr. has previously contemplated leaving the music industry. Whether he walks away, goes on hiatus, or powers through, Lil Wayne has the support his fellow musicians.

Dear @LilTunechi I just wanna remind you that absolutely nothing and no one in this world can defeat you. Tell them devils back back.