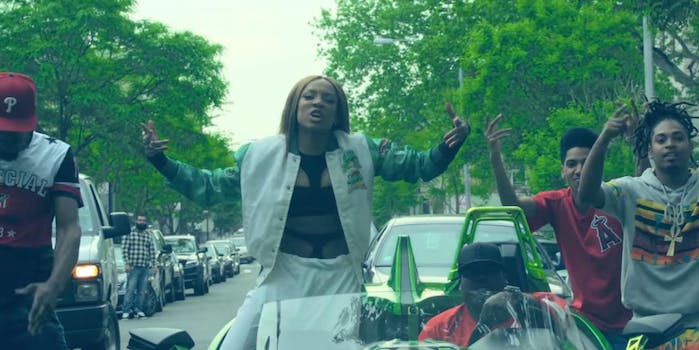 Did Lil Mama just drop the song of the summer?

Yes, and you can thank the kids on Vine for that.

No need to drill it down to the Sweet 16 and pick colors, rapper Lil Mama has released the definitive, essential anthem that will come to define the summer. Her song “Sausage” debuted early Friday and it’s an adventurous, armpit-sweat block banger that incorporates the organic, empowering work of classroom teenagers.

Playing on the #sausagemovement Vine meme that badass kids are perfecting, the song draws direct inspiration from this viral, 30-second hook.

This is the best one hands down😂http://t.co/ErBf8sNsdJ

It’s a perfectly timed swipe and swoop from Lil Mama, who brings a bevy of manic personas to this hip-hop love letter. I was jotting down the references but she just calmly thanks them all in the liner notes: Slick Rick, Big Sean, Atown, Teena Marie, Method Man, Fetty Wapp, Dougie Fresh, Lil Vicious, Mary J. Blige, and Big Mac for “starting the sausage movement.”More viscerally, “Sausage” is a foaming, infected track that will soon be inescapable.