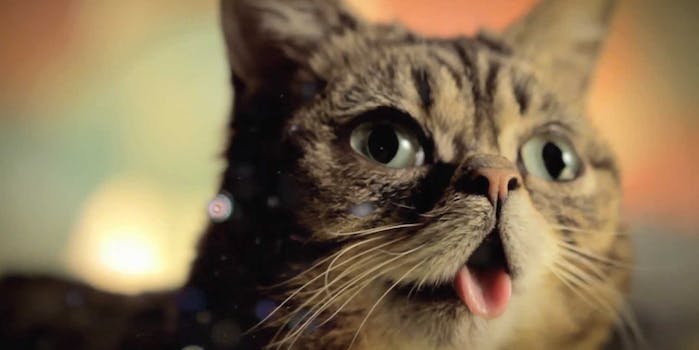 Lil Bub turns 2, gets a talk show for her birthday

The tiny cat with the huge online following will host an interview show on Revision3.

One of YouTube‘s top cats just got a very special birthday present: Lil BUB will be getting her very own online talk show.

The famous feline and her owner, Mike Bridavsky, made the announcement on YouTube while they celebrated the big day with cake and fun hats. Initially disappointed that she wasn’t getting fish, she decided to call her new show Lil BUB’s Big Show.

The 2-year-old cat was born with a number of genetic mutations that affect her appearance. She gained Internet fame after Bridavsky was encouraged by friends to post photos of her to Tumblr. Since then, she’s become one of the most famous cats online—rivaled by perhaps only Grumpy Cat, who’s heading to Hollywood—with a big following on social media.

We’re only halfway through the year, but web production company Revision3 is already calling 2013 “the year of Lil BUB.”

“We’re partnering with this special cat to create a show unlike the Internet has ever seen,” Ryan Vance, Revision3’s Senior VP of Programming and Production, wrote. “It will be as BUB her self, and allow her to showcase her many skills, mostly her people skills.”

The show, which will feature Lil BUB interviewing people on the street, at film premieres, and via Skype, will launch sometime in August. The show will air on Lil BUB’s YouTube channel, which already has over 30,000 subscribers.

Along with her YouTube channel, Lil BUB has a book coming out and starred in VICE’s Lil Bub & Friendz, a documentary that premiered at the Tribeca Film Festival and won the award for best online feature. She’s even proved that she’s able to both ham it up for the camera and keep it professional during an interview with Grace Helbig.

“Dog people can create communities by going to dog parks,” he told TheWrap. Cats don’t like leaving the house so if you’re a cat owner and want to find a community of cat people, you need to find it online.”

So far, the fame hasn’t gone to the cat’s head, and she’s even hosting a Google+ hangout at 6 pm EDT.

Not a bad way to celebrate a birthday.