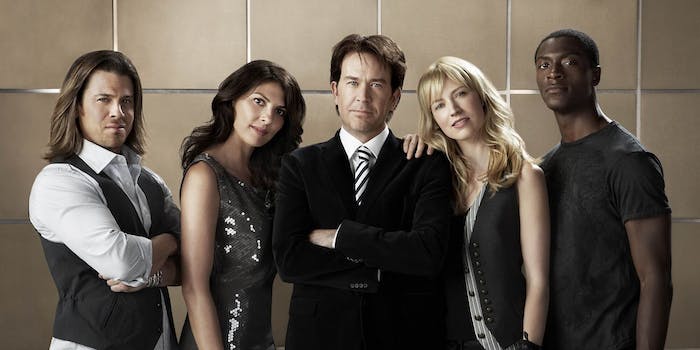 ‘Leverage’ will return for a new season with original cast

Eight years after its cancelation in 2012, beloved crime caper show Leverage is set to return, with all but one of the original cast members reprising their roles.

Created by John Rogers and Chris Downey, Leverage ran for five seasons on TNT, a lighthearted drama about a team of criminals who use their powers for good. It earned a cult following thanks to the lovable dynamic between the main characters, and its increasingly unsubtle anti-capitalist message about breaking the law to defeat rich and powerful villains. As the political climate shifted after its cancelation, Leverage has felt more and more relevant with every passing year.

Deadline announced original cast members Beth Riesgraf, Gina Bellman and Christian Kane will return as series regulars, with Aldis Hodge (Hardison) in a recurring role, working around his schedule filming City on a Hill for Showtime. Timothy Hutton, who was accused of sexual assault this year, will not return. Instead, the Leverage team will have a new leader played by Noah Wyle of the Librarians TV franchise, also produced by Leverage exec producer Dean Devlin.

Devlin is in charge of the Leverage revival, with Rogers and Downey as consulting producers. John Rogers clarified on Twitter that the day-to-day showrunner will actually be Kate Rorick, who worked on The Librarians and Marvel’s Cloak & Dagger.

The new Leverage is due to start filming in June or July (depending on coronavirus safety measures), and will air on IMDb TV—a streaming service that you may not have heard of, but will be glad to learn is free to watch with ads.