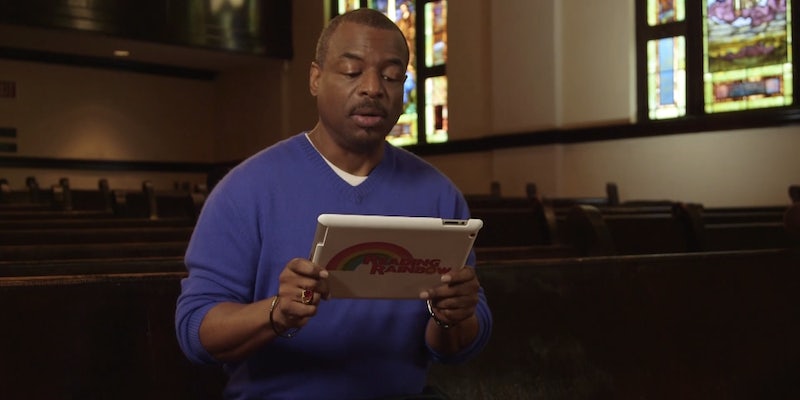 The actor is in a bitter legal battle over the iconic children show's intellectual property.

Actor LeVar Burton, who taught Gen-Xers and millennials about the wonders of literature via PBS’ Reading Rainbow, is being sued for his continued use of the show’s iconic catchphrase. The 60-year-old peppered his podcast, LeVar Burton Reads, with the tagline “But you don’t have to take my word for it,” and that’s put him in legally dubious territory.

WNED-TV Buffalo, New York, which originally produced Reading Rainbow, is suing Burton. It’s the latest chapter in an ongoing dispute about the show’s intellectual property. As the Hollywood Reporter notes, the suit alleges that “Mr. Burton’s goal is to control and reap the benefits of Reading Rainbow’s substantial goodwill—goodwill that unquestionably belongs to WNED.” More specifically, that Burton is guilty of: “copyright infringement, conversion, cybersquatting, violations of the Lanham Act, breach of contract and interference with customer relations.” WNED is seeking profits from the actor’s podcast.

Burton’s RRKidz production outlet has been working with a proper licensing agreement from WNED since 2011. Though he acquired the rights to the brand, turned Reading Rainbow into a successful iPad app in 2012, and raised millions on Kickstarter to revive the series in 2014, the original agreement is murky. As the Reporter notes:

WNED’s interpretation of the agreement is that the 2011 deal represented a “divide and conquer” approach to the renaissance of Reading Rainbow whereby RRKidz would be allowed to take over digital distribution of the series while the broadcaster would focus on making new episodes. Profits were to be split.

Burton hosted Reading Rainbow from 1983 to 2006, during which he won 12 Emmys. As of Aug. 1, readingrainbow.com is no longer operated by RRKidz. In its place: the original logo, attributed to WNED. It’s a bitter reminder that nothing gold can stay.