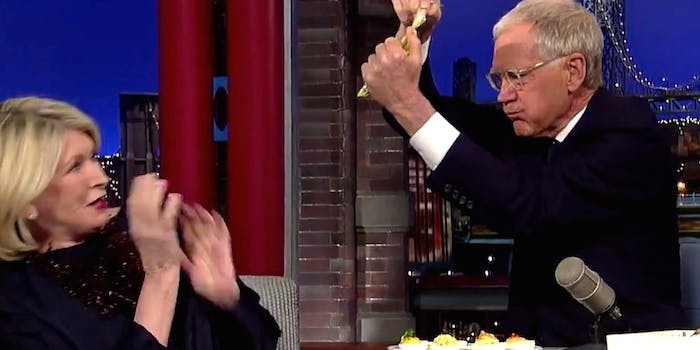 Now that he has announced his retirement, David Letterman is getting crazy with Martha Stewart.

After announcing his retirement from the Late Show last week, host David Letterman invited Martha Stewart on as a guest. And it got weird, fast. Stewart had brought with her a tray of devilled eggs, and two glasses of beet lemonade, as you do.

Almost dropping the tray, Letterman enjoyed the eggs so much that he began to eat the filling directly from an icing tube. And then instead of drinking Martha Stewart’s prepared drinks, he began chugging from a bottle of vodka. Now, while it was funny to watch, there’s one thing to remember: David Letterman is a recovering alcoholic, and has been for around 30 years.

Normally during the Late Show, alcoholic drinks are replaced with either water or juice, and aside from a few accidents, he has not fallen off the wagon. While it’s likely that the bottle was simply filled with water, the segment only becomes more awkward as Letterman attempts to feed Martha Stewart directly from a piping bag.

Letterman jokingly chugging “vodka” from the bottle has been a long-running joke on the Late Show, with previous targets including Betty White and Lindsay Lohan.

But perhaps as Letterman approaches the end of his long run on CBS and the network obsess over his successor, he has simply decided to let his show descend into anarchy. After inviting Bill Murray and Lady Gaga on the same show, it looks like David Letterman is content to let things get really weird.