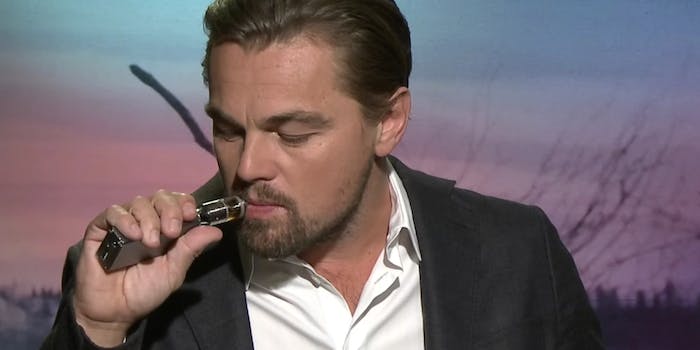 Two years after it was the Oxford Dictionaries word of the year, vaping may have just hit the limelight in a major way, thanks to Leonardo DiCaprio‘s chill last night at the SAG Awards.

While the actual awards ceremony provided a much-needed diverse counterpoint to the #OscarsSoWhite Academy Award nominations, DiCaprio stole the show by casually puffing a vape pen—that’s Advanced Personal Vaporizer to sticklers and “millennial bait” to the rest of us.

The actor also won his first “Outstanding Performance” SAG award thanks to his Oscar-nominated leading role as real-life badass Hugh Glass in The Revenant. But instead of wondering whether this means Leo’s Oscar curse will finally be broken, most of us were just divided about whether his vape pen is cool, romantic, or just plain douchey.

Team romance had plenty of daydreaming to do:

.@LeoDiCaprio you used to hold me like you hold your vape pen

My perfect day:@robdelaney scoops me up and runs me to Leo's place where we vape and laugh and have the best time. pic.twitter.com/aDHskm5qQ0

Leo's date at the #SAGAwards2016 was his vape pen. #neverbeenmoreinlove

LEO VAPING AT THE SAG AWARDS WHAT A SWAG MASTER pic.twitter.com/qSforapOIY

@ChristianChopp when people say vaping is bad just tell them Leo does it https://t.co/rIEGuYglQ0

But Team Douchebag also got in plenty of jeering:

#SpoilerAlert That photo of Leo vaping makes it easier to watch him die at the end of Titanic.

I hope Leonardo DiCaprio does a method biopic about the kid whose e-cig blows up in his face. God what a douche.

Only-fucks-22-year-old-10s-fat-vape-pen Dicaprio is probably the best celeb and this is how we will remember him in 50, 100 years

While vape pens may be a very healthy alternative to smoking, they’re mostly a perennial source for public mockery. It looks like not even DiCaprio’s vape pen will be able to change that public perception. Maybe a few more vape-offs with Revenant and Inception co-star Tom Hardy will help?

Still, it’s nice to know that even if we lose the “Where is my Oscar?” Leo meme at the upcoming Academy Awards, “Where is my vape pen?” will be waiting in the wings.