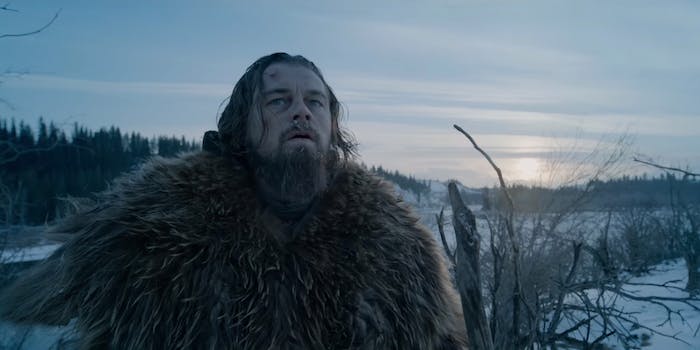 The curse is over: Leonardo DiCaprio won an Oscar

Leonardo DiCaprio has received six Oscar nominations (five of them in an acting category) over the years, but his losing streak—and its corresponding meme—came to an end tonight.

He won an Academy Award for his portrayal of fur trapper Hugh Glass in The Revenant, which was based on true events. Once his name was announced, the audience at the Dolby Theater in Hollywood gave him a standing ovation.

“The Revenant was a product of the tireless efforts of an unbelievable cast and crew I got to work alongside,” DiCaprio said in his acceptance speech.

But his speech also got political as he addressed global warming and the trouble the crew had in finding part of the world that had snow for them to film in.

“Climate change is real; it is happening right now. It is the most urgent threat facing our entire species, and we need to work collectively together and stop procrastinating. We need to support leaders around the world who do not speak for the big polluters or the big corporations but who speak for all of humanity, for the indigenous people of the world, for the billions and billions of under-privileged people who will be most affected by this, for our children’s children, and for those people out there whose voices have been drowned out by the politics and greed. I thank you all for this amazing award tonight. Let’s not take this planet for granted. I do not take tonight for granted.”

Throughout the press tour for The Revenant, DiCaprio and director Alejandro González Iñárritu often spoke of their pride for the film despite miserable conditions and how difficult it was to make.

“I feel blessed to be able to do movies like this,” DiCaprio said on the red carpet. “I’ve worked for almost 25 years in this industry, and here I am representing a movie that I feel so particularly proud of.”

Some members of the Academy saw the constant mention of those difficulties as a turnoff, seeing it as a transparent attempt to win an Oscar.

DiCaprio received his first nomination for What’s Eating Gilbert Grape in 1993, and as he racked up nods for his work in The Aviator, Blood Diamond, and The Wolf of Wall Street, his quest to finally win that elusive Oscar became the stuff of legend—and an entertaining meme. In 2013, fans made DiCaprio his own Oscar after not winning.

His quest for an Oscar even became a playable game.

DiCaprio won nearly every award during this year’s awards season and was at the top of many sites’ predictions lists, so it looked as if his Oscar was inevitable. But before that happened, we had to rib him a little, one last time.

But now that he’s won? The collective Internet can’t handle it, whether it’s because this day finally came or we don’t have to see him try even harder to win.

At last, our long national nightmare is over! #oscars

[Leo immediately begins starving himself and carving an acceptance speech into his arm with the trophy]
PRESENTER: jesus

The meme is dead. Long live the meme.