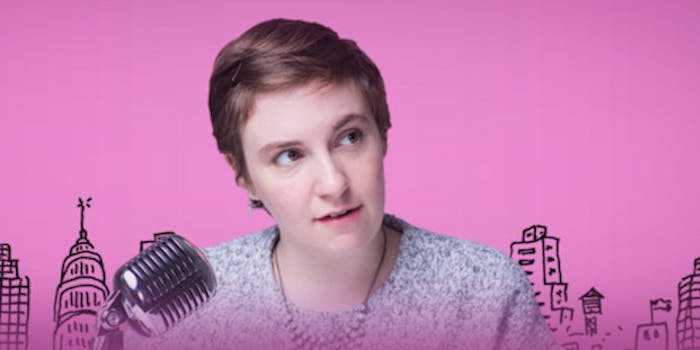 Ladies who podcast: Meet the new crop of podcasting hosts

Get your headphones ready.

If you’re a fan of socially minded, funny, female-helmed podcasting, your late 2015 is about to pop off in a major way.

Tuesday morning, Lena Dunham announced on Instagram that she’ll be launching a podcast “about gender, sexuality and feminism” for BuzzFeed. It’ll be called Women of the Hour, and there’s a five-minute preview of the first season on iTunes now.

Season 1 will have “five episodes on five different themes,” and a lineup of exciting guests like Emma Stone, Zadie Smith, and Jemima Kirke.

Dunham tweeted that the podcast will be an extension of a lot of the themes she covers in her book of essays, Not That Kind of Girl.

In honor of the Not That Kind of Girl paperback release, I decided to explore the themes of my book further, (cont) https://t.co/nH78A8Q3Be

As if that weren’t enough good news, Women of the Hour is the latest in a string of awesome female-helmed podcasts that have been announced this fall. There’s a lot more amazing stuff on its way to your headphones soon.

Here’s a peek at the other fire podcasts to have on your radar:

Alanis Morissette just released a brand new podcast called Conversation With Alanis Morissette, where she’s planning on having “conversations with different individuals from different schools and walks of life, discussing everything from psychology to art to spirituality to design to health and wellbeing to relationships—whether they be romantic or colleagueship or parent-with-children relationships—and we’ll be diving into science, neurobiology, music, travel, social commentary, maybe a tiny pit of political [sic], and feminism.” Damn, Alanis. The premiere episode is out now.

Comedian and writer Sara Schaefer will be launching a new podcast on WNYC as part of their new podcast project, WNYC Studios. No theme for the show has been announced yet, but according to the New York Times, it will be scripted fiction, which will be a departure from her interview-based podcast/live show, Lies.

The Daily Show’s Jessica Williams and standup Phoebe Robinson are expanding their live show about friendship, blackness, and being a lady, 2 Dope Queens, into a podcast with the same name for WNYC.

Bad Feminist author Roxane Gay will also be launching a WNYC podcast, but there’s no word yet on what the title or premise will be.

Screengrab via Women of the Hour/iTunes