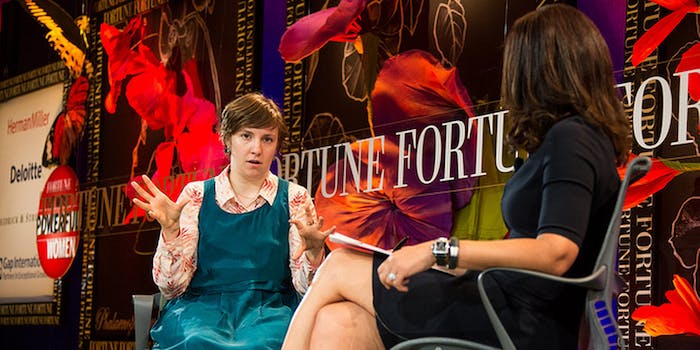 The actress has cancelled two dates on her book tour.

Over the weekend, Lena Dunham fell into a “rage spiral” addressing allegations of sexual abuse.

In a piece from Oct. 29, National Review columnist Kevin D. Williamson reviewed Dunham’s new memoir, Not That Kind of Girl. He wastes no time ripping the Girls star’s life of “pathetic privilege” apart, and further into the critique, he calls Dunham’s parents child abusers. Then he calls Dunham herself one, in response to a passage in which she recounts experimenting with her younger sister, Grace, as a child:

Another conservative site, Truth Revolt, singled out Dunham’s “sexual predator” quote and led with that. The full passage was posted on Twitter as well.

Here’s the Lena Dunham “sexual predator” joke, in case yall thought it was made up. pic.twitter.com/XmMUQD1OuK

Dunham responded on Saturday with a series of tweets.

And by the way, if you were a little kid and never looked at another little kid’s vagina, well, congrats to you.

Usually this is stuff I can ignore but don’t demean sufferers, don’t twist my words, back the fuck up bros.

I told a story about being a weird 7 year old. I bet you have some too, old men, that I’d rather not hear. And yes, this is a rage spiral.

As of yesterday, Dunham cancelled two European dates on her book tour.

Lena Dunham cancelled her book tour? Guess being a sexual predator doesn’t resonate well with the generation she’s supposed to speak for.

The hashtag #DropDunham is also circulating on Twitter, urging Planned Parenthood to drop her as a partner.