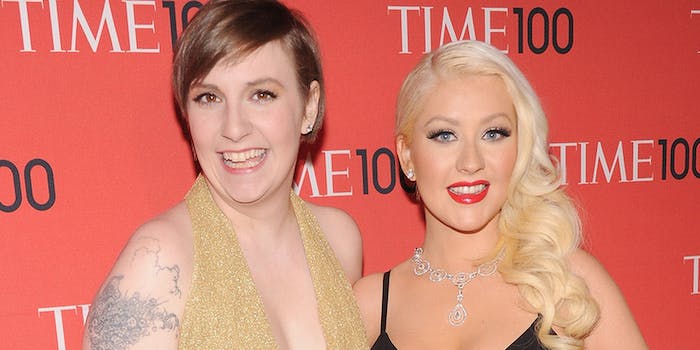 "I'm trying to create a safer space for myself emotionally," Dunham said at the Golden Globes red carpet show.

At the Golden Globes 2015 red carpet show, Girls auteur Lena Dunham told host Ryan Seacrest she deleted her Twitter because “I’m trying to create a safer space for myself emotionally.” She called Twitter “the dark side of the Internet.” Not inaccurate!

“People, like, threaten my life and tell me what a cow I am,” she said.

She called her haters “deranged neocons telling you you should be buried under a pile of rocks.” (This is what she’s referencing.)

Lena Dunham still has an active Twitter presence. Maybe she was kidding, or maybe she just got a team of social media assistants (yes, that’s a real thing) to publish promo for Girls season 4 every now and then.

Update: She took to Twitter to clarify her comments.

I wouldn’t blame Dunham if she took an extended social media break. She wasn’t just being dramatic; her Twitter mentions are filled with invective. Looking through a Twitter search of her name, I’d guess about 75 percent of her mentions are accompanied by phrases like “shut up” or “skank” or criticism of her dress and her weight. And that’s nothing compared to the frequent accusations that she sexually abused her sister.

Ryan Seacrest responded to her Twitter quip by saying, “You should see what they say about me.” It likely wouldn’t faze her.

I don't love Ryan Seacrest then saying, "You should see what they say about me." She gets it worse, Seacrest. #GoldenGlobes

Hopefully we can get back to what really matters soon enough.

Omg Amal has gloves on!!!! #ERedCarpet