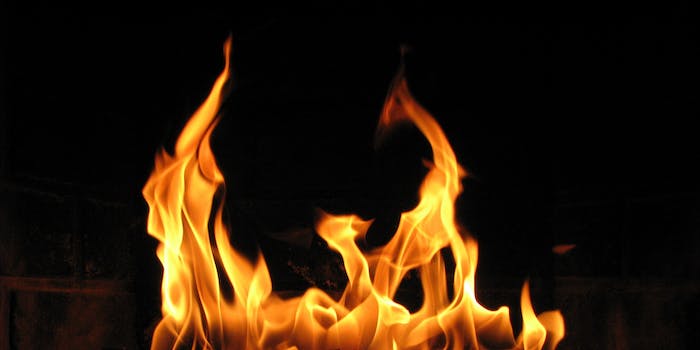 Satan doesn’t want you to see this movie

The devil's in the promotional details.

If you’re not a Christian, Satan really doesn’t want you to see Left Behind.

Beelzebub apparently threw in his two cents about the upcoming Christian thriller Left Behind, which opens in around 1,800 theaters on Friday. The Nicolas Cage-led flick about an apocalyptic world after Christians are taken to heaven is based on the popular faith-based book series of the same name.

A picture from the film’s Facebook page shows a panicked crowd with a note from the devil himself asking Christians not to bring “unbelievers” to the theater, presumably because it could scare them into becoming Christians themselves.


Left Behind’s promotion company is pulling out all the stops to bring religious viewers to the movie theater. The film’s Twitter and Facebook pages share theologies about the Rapture as a possibly true event, and there are ministry kits available on the film’s website that include six weeks of group Bible study.

The film’s stars and key backers have also been very vocal about the film, as well as their faith. This includes Duck Dynasty star Willie Robertson, who’s an executive producer, as well as American Idol winner Jordin Sparks. Film star Nicolas Cage even said his pastor brother inspired him to do the film.

And it’s not just about faith. For some of the people behind the film, it’s also a warning of what’s to come.

“People often say, you know, ‘Is this a big deal, where the good people go and the bad people stay?’” Left Behind co-author Jerry B. Jenkins said on The Glenn Beck Program. “And I have to say, having been a Christian most of my life, there are some people that will go that are worse than the people who stay.”

It’s no surprise, considering almost half of Christians not only believe the Rapture will happen, but that it will be within the next 40 years. That’s known in Christian theology as the end times, the period right before true Christians are lifted up to heaven and there’s a seven-year tribulation before Jesus Christ returns.

Looking for a way to talk to your loved ones about the Rapture, but don’t know how? @leftbehindmovie is in theaters October 3!

I think #leftbehind just made the bible hip. now everyone will be downloading revelations to find out what happens to those left behind.

Still, others have called Satan’s anti-endorsement “tongue-in-cheek,” mainly because director Vic Armstrong has been relatively quiet about the film’s subject material. He told Yahoo! Movies earlier this year he didn’t even know Left Behind was based on the Bible when he first read the script.

“[My agent] David said, ‘Well, what about the religious aspect?’ And I said, ‘What religious aspect?’” Armstrong told Yahoo! Movies. “He said, ‘Didn’t you find it strange when people disappeared on the plane and everything?’ I said, ‘David, I did Starship Troopers, and I didn’t question it when great big bugs came climbing over the hill and ripped people’s heads off. That’s the world I live in.’”

@thechrisleroux Pretty sure he’d be rooting for the Decepticons. ;)