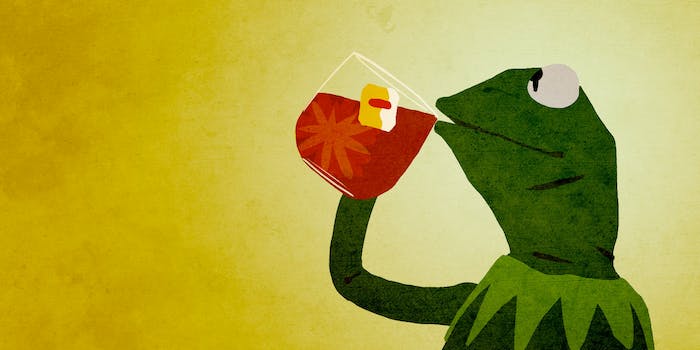 It was a series of boasts and blocks, but the Cleveland Cavaliers’s historic Game 7 win on Sunday was really summed up by LeBron James‘s hat, which featured an image of a frog sipping tea.

That image has come to be associated with the Kermit sipping tea meme, also known as the But That’s None of My Business meme, which has become a visual representation of internet shade. Remember when Drake thought he was trolling James during the Eastern Conference Finals with some damn emoji? Remember when America’s sports writers voted rival Steph Curry as the NBA‘s unanimous MVP?

Never has a meme hat said so much by saying so little. James also showed off the hat’s versatility and how easy it goes from a day to night look.

#Lebron walking into the finals with a "Clutch" shirt and a Kermit sipping tea hat. #NBAFinals pic.twitter.com/lBs9LTmVVb

It was a meta-meme moment for James; last night, his cry-face was thrust into the meme-light alongside Crying Jordan. But this meme was king.

And now, everybody wants a piece. SB Nation has the lowdown on where you can actually find the hat: eBay, where, at least at this listing, more than 125 were sold in an hour. (The hat manufacturer did not immediately respond to a request for comment.)

Let’s toast to a summer of tea.