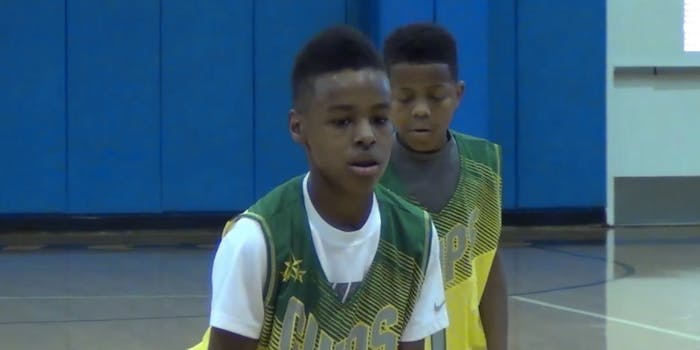 LeBron Jr. shows why he deserves to be heir to the throne

You can see it now: A backcourt of LeBron and his son, Bronny, starring for the Cavs in 2024. Will one ball be enough?

There are many father-son tandems that have graced the hardwoods: Dell and Stephan Curry; Tim Hardaway Jr. and Senior; Joe and Kobe Bryant; and Rick Barry and his four sons, Scooter, Jon, Brent and Drew. None of these instances of genetic athletic prowess has the projectable prowess of the future pairing of LeBron James and his 10-year-old son, LeBron James, Jr., a.k.a Bronny. Fast forward 10 years, and the senior James will be 40 when his son turns 20, which raises the dream scenario of a basketball James Gang that would be a huge draw for the NBA.

Sure, we are going a bit overboard here, but a video taken during the Ronald Searles Holiday Classic shows Bronny with some truly mad hoops skills, including a mean crossover dribble, no-look passes, and dead-on short-range jumper. The grade-based tourney, played in Houston, shows an unselfish player who has great court presence and a sense of style that surely has the folks at Nike dreaming up a new line of kids footwear and future viral videos of dad and son playing one-on-one.

The spotlight has been on Bronny for some time, with clips that show the young man’s skills gaining confidence over the past few years as he grew up. The spotlight began to grow on this young talent earlier this year with a video showing the younger James hitting a one-handed half-court shot during a Cavs practice.