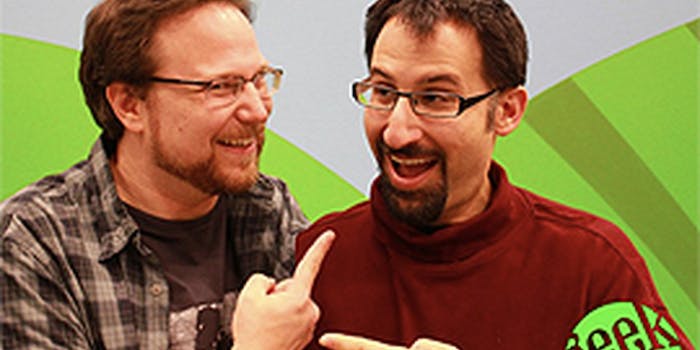 Inside “LearningTown,” a bold children’s TV satire for the Web

Comedy duo Paul and Storm aim to create the 30 Rock of children’s television, with a hilarious soundtrack to boot.

In the opening episode of the new YouTube series LearningTown, a Mr. Rogers-esque children’s programming icon tragically drops dead, leaving two down and out singer-songwriters to take his place.

In reality, the two novices are the accomplished humor musicians Paul and Storm, a.k.a. Paul Sabourin and Greg “Storm” DiCostanzo, who began their career as part of the acclaimed a cappella vocal group Da Vinci’s Notebook. With famous covers (“Call Me” and “Stuck in the Middle With You“), awesome parodies (“Secret Asian Man“) and comic songs (“Another Irish Drinking Song“), it was only natural for the duo to continue collaborating after the vocal group disbanded in 2004, churning out hilarious songs like “A Better Version of You,” which they jokingly referred to as what was likely to be their only children’s song.

Instead, the pair has pushed all in on children’s parody. LearningTown, which airs on Felicia Day’s Geek & Sundry channel, offers viewers a behind-the-scenes look at the bizarre world of children’s television production, with plenty of comedy and geek culture to boot—oh, and puppets.

Before the season premiere on Jan. 15, the Daily Dot sought to find out, via email, just why Paul and Storm, who formerly toured with Jonathan Coulton and guest-starred on The Guild, choose a puppet show parody with which to make their mark on Web TV.

Daily Dot: Tell us why the world is ready for an adult musical webseries about a kid’s TV show.

The world isn’t just ready for LearningTown, it needs LearningTown.In the tradition of shows like 30 Rock and The Larry Sanders Show, we’re giving people a look at what happens behind the scenes at an old-school kid’s show. It ain’t always pretty, but it is always entertaining. And who doesn’t love puppets? Mean people, that’s who. (Mean people are not allowed to watch our show.)

DD: What’s been the reaction to LearningTown so far from the Geek and Sundry community?

So far, the feedback has been overwhelmingly positive (which is amazing, considering the general reputation of YouTube comments). It’s helped that, all along the way, producers Kim Evey and Felicia Day were very involved in the development, which gave us and head writer Josh Cagan a leg up in crafting LearningTown in a way that would best appeal to Geek & Sundry’s existing fans, and also hopefully bring new people into the fold.

DD: I’m noticing a bit of a trend towards meta/autobiographical Web series lately. How much of Learning Town recounts your own experiences as performers?

Although we’ve never run a kid’s show, we’ve certainly faced our share of absurd situations and creative roadblocks as professional musicians/writers/doers of crazy things, which helped inform our overall writing process. And, of course, the characters being named Paul and Storm, they can’t be THAT far from our actual selves. But they’re certainly pretty heightened. We like to think of them as “exploded” versions of ourselves.

DD: You guys have performed together for over 15 years. How do you divvy up the partnership for the creative aspects of LearningTown?

From the start, the two of us worked shoulder-to-shoulder-to-shoulder with Josh to develop the story and scripts. We literally sat around a table and plotted out the season and episode arcs together, and Josh would then distill all the ideas into scripts, which we’d then all edit until they were as good and funny as we could make them. We also each wrote an episode ourselves, which then went through the same revision process.

Musically, the process was more or less our usual scheme: One of us generally acts as the “pilot” for the song, putting together its bones, and at some point the other will come in to help flesh things out.

DD: You’ve written over 20 songs for the show so far. Will there be a LearningTown soundtrack?

Naturally! We’ll be releasing each episode’s songs as singles for digital download; then at the end of the season, we’ll wrap them all up into a pretty package, thereby allowing us to charge the public twice for the same thing. PT Barnum would be proud…

DD: I’m already interested in Bresha Webb’s character, Cookie Tuesdays. What can we expect from her in upcoming episodes?

In many ways, Season 1 is really about Cookie. Without giving too much away, by the end of the last episode it’s Cookie who learns and grows the most. Cookie is a producer brought in from a rival show to help try to keep everything from falling apart; as such, she’s sort of LearningTown’s “Liz Lemon”—the single voice of reason and normalcy in the eye of the kids-show hurricane. And Bresha does an amazing job of making the character interesting, compelling, and relatable, while at the same time having outstanding vocal and dancing (!) chops to boot. All in all, Bresha totally “got it.”

DD: It seems like there’s always a strangely thin line between children’s programming and bizarre ‘80s horror films. Do I sense a touch of the macabre in LearningTown? (I can easily see LearningTown’s competitor, rival children’s show Hikky Burr, becoming Candle Cove.)

Yeah, we can see that. We grew up watching a lot of kids’ TV shows, and went back to watch more in preparing to write the show; no matter the era, lots of kids’ TV has eerie, creepy, or uncanny aspects to it. I mean… clowns! It’s fascinating that they were like rock stars, even as late as the ‘70s, given how downright frightening they are. But no worries; instead of clowns, we went with puppets, whose Macabre Index (MI) is much lower. Though Learning Larry…well, you’ll just have to watch it to find out. 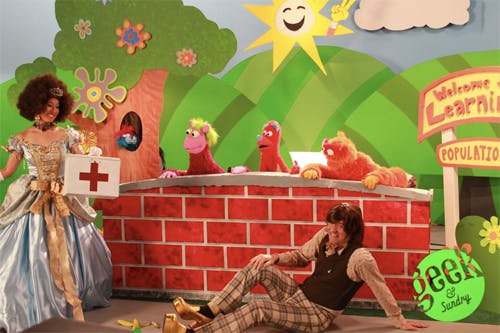 DD: In the first episode alone, you spoof open mic nights, down and out musicians, Willy Wonka, Yo Gabba Gabba, and Hollywood hipsters. What else can we look forward to the two of you skewering in future episode?

We do live to skewer. Also in the season one rotisserie are princesses, “viral” videos, PowerPoint, commercials, the ‘80s, and celebrities, just to name a few. But we save the sharpest skewers for ourselves, because man can we be idiots!

DD: You guys have collabed with Jonathan Coulton extensively; any chance we’ll see him on Learning Town?

The timing didn’t work out to bring him in for Season 1. But if we get a second season, we plan to cram him in a duffel bag and smuggle him out to L.A. and force him to be on the show. (Shhh! Don’t tell him! We want it to be a surprise.)

DD: Da Vinci’s Notebook was a hugely influential part of the growing a cappella craze throughout the 2000s. Do you ever look back and marvel at how much has changed for the genre since then?

Absolutely, though in a lot of ways it’s still the same. Back in our collegiate and Da Vinci’s Notebook days, there was a very dedicated, active and enthusiastic subculture that always a sense that the widespread embracement of a cappella was just around the corner. And while it’s great that today there are shows like The Sing Off and movies like Pitch Perfect, it seems like it’s still mostly a curiosity and/or novelty to most people. (Sort of in the same the way music-comedy duos are.)

DD: Has Internet culture mainstreamed the work you guys do, or has it helped unite you and your target audience?

Internet culture has certainly been instrumental in helping us find our audience, and in helping us continuously evolve for them. Many of the projects we’re involved with today, including LearningTown, can be traced directly to our activity on Twitter, Facebook, blogs, and podcasts.

And without a doubt our trajectory has been guided by Internet culture, which to our minds has reshaped the mainstream much more than it serves it. Previously, to be “mainstream” meant top-down acceptance or recognition: signed by a record label, included in a network TV production, etc. Today, almost anything that’s in digital form can become mainstream, and nearly instantly. All it takes is for enough individuals to like what you’re doing, and for them to express that preference to other individuals (i.e. please watch and share LearningTown!) Then the traditional mainstream outlets will want in on it, too, because it’s already been vetted by the best focus group ever, called “The World.” So if we do find ourselves thought of as a mainstream act, it’ll be because enough people found merit in what we do.

DD: You guys are doing W00tstock founders’ night next month with Adam Savage and Wil Wheaton. Any chance of a live broadcast for those who can’t make it to San Francisco?

We always talk about livestreaming our w00tstock events, and once again we’ve let the opportunity slip by. So much for allowing Internet culture to evolve us.

All photos courtesy of Geek & Sundry