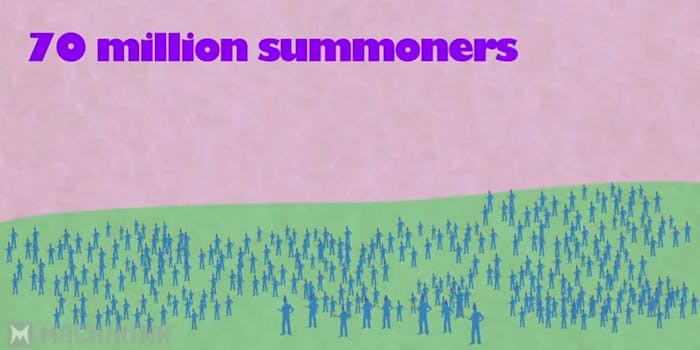 6.5 million people die every day in League of Legends

Here are a half-dozen astonishing factoids that show just how tenaciously popular this 5-year-old game really is.

Did you know that, for every baby born, roughly 18 League of Legends players meet their deaths?

That’s a lot of virtual deaths, and it just goes to show how tenaciously popular the 5-year-old game really is. A new YouTube video from Machinima, the animation studio that exclusively employs in-game graphics to tell stories, reveals even more stunning facts about this hugely popular multiplayer battle arena game.

Since its 2009 release, League of Legends (LoL) has attracted millions of players and casual fans alike. The debut episode of Machinima’s “Graphic Content” tells us, for instance, that an April 2013 battle between LoL combatants Wickd and sOAZ, vying for the chance to represent Europe at the League Championship Series All-Star Game, set a personal livestreaming record of over 137,000 concurrent viewers,

Graphic Content placed several other LoL figures into perspective for the casual fan:

Using the facts from the video, The Daily Dot crunched some of its own numbers.