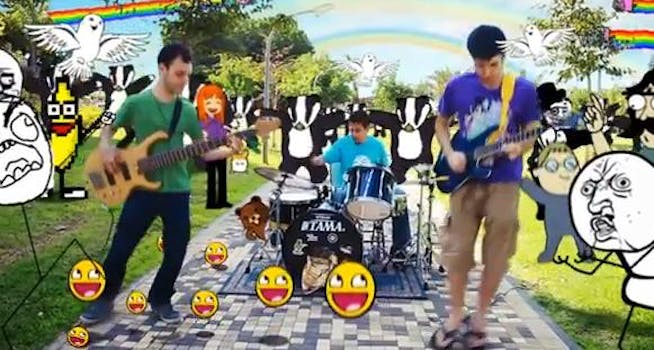 Yo, Internet dawgs, the Gag Quartet heard you like memes. So they put some memes in your meme so you can meme while you meme.

And no surprise, it’s currently clogging up the Internet tubes at an alarming rate.

The manic mashup hovered on the front page of Reddit yesterday before being picked up by Buzzfeed and Mashable. In less than two days, “Le Internet Medley” has collected 700,000 views.

Everyone appreciates a helping hand, which is why Internet fans so readily join a viral-video circle jerk like this one. From Nyan Cat to Rebecca Black to Chuck Testa, there’s something for everyone who ever liked anything online.

It’s an Internet gimmick that apparently doesn’t have a shelf life.

This idea of mashing up Internet culture has been done before. One YouTuber, BeyondTheNumbers2011, wrote of the “Le Internet Medley” video, “This should be the anthem﻿ for the internet,” but it might have to wrestle that honor from Weezer’s ‘Pork and Beans.’”

That clever meme mashup from 2008 featured viral-video stars like the “Chocolate Rain” and “Numa Numa” guys.  “Pork and Beans” has been viewed more than 8 million times, and quickly endeared the band to the Internet masses. The positive sentiment at that time: Here’s a popular band that actually understands the Internet!

Weezer acquired new fans with their deft ability to manipulate Internet culture, and the video went on to win “Best Short Form Music Video” at the 2009 Grammy’s.

And watch out, Gag Quartet: It still has its defenders.

“All YouTubers, rise for﻿ national anthem!” wrote FireVortex720 on “Pork and Beans” today.

Is the Internet big enough for two theme songs?