"We're like the real Banksy, just silently putting things out there and seeing what happens."

Imagine yourself on the way to work—crisp suit, tie, briefcase in hand—just another content worker in the daily rat race. You turn a familiar corner, a corner you’ve turned a thousand mornings before this one, when suddenly you see this: 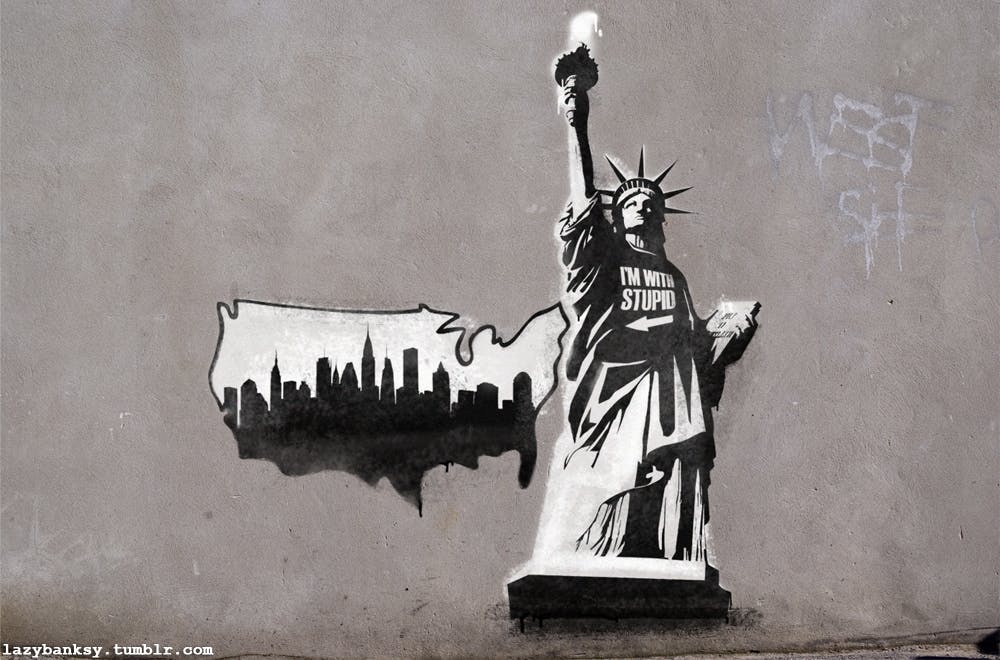 Your mind is completely blown. It’s confrontational. Uncompromising. Upsetting, but in a confusing way. Not very good, actually. Wait, what are you even looking at?

The unmistakable work of Lazy Banksy.

Of course, these lesser works of Bansky aren’t real in any sense. They’re neither created by Banksy himself nor physically painted out in the world. They’re actually the work of Lazy Banksy, a Tumblr run by comedy writer Cullen Crawford and illustrator Michael Nudelman. (Full-disclosure: Both individuals are friends and former coworkers of mine.) 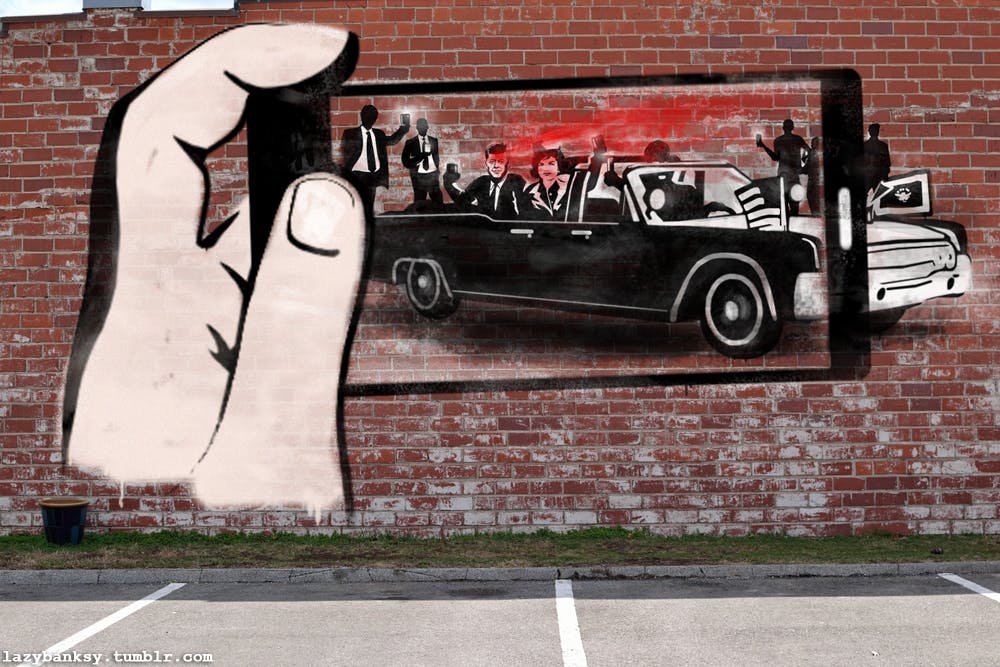 It began, like so many snarky things, on Twitter. Last year, Crawford and his followers spent a productive day on the hashtag #Banksy2013, sarcastically predicting what the seminal street artist had in store for the world.

Trampled Santa in front of a Best Buy on Black Friday. #Banksy2013

“Banksy is just basically hilarious to me,” Crawford relates. “He’s like if an overwrought editorial cartoon went to college at Urban Outfitters.”

The jokes resonated, and he sought out collaborator Michael Nudelman, a freelance illustrator to take the logical next step of bringing these half-assed Banksy concepts to life. One image sees iPhone fanatics lining up willingly for an Apple-manufactured electric chair. Another shows President Obama riding atop a drone that—for probably no reason—bears the face of Falcor from The NeverEnding Story. 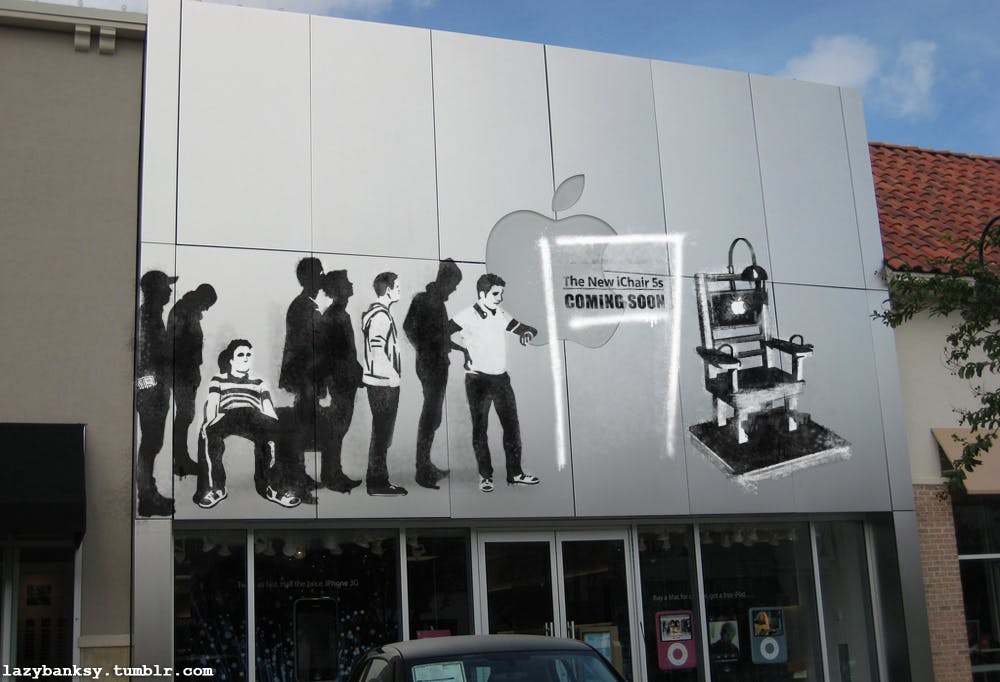 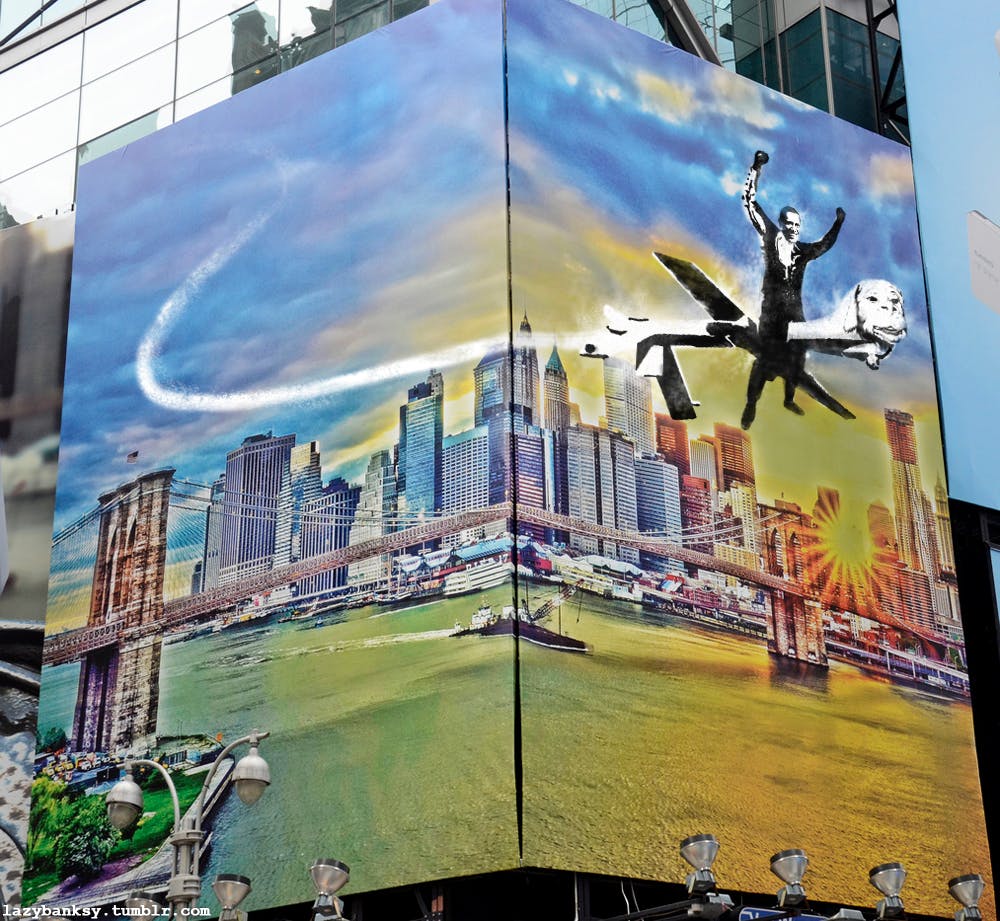 “For each image, Cullen sends me a one line idea and I make the picture, then maybe we have one or two rounds of some edits to get it right,” notes Nudelman, a freelance illustrator with a decidedly un-Banksy background in fine art. 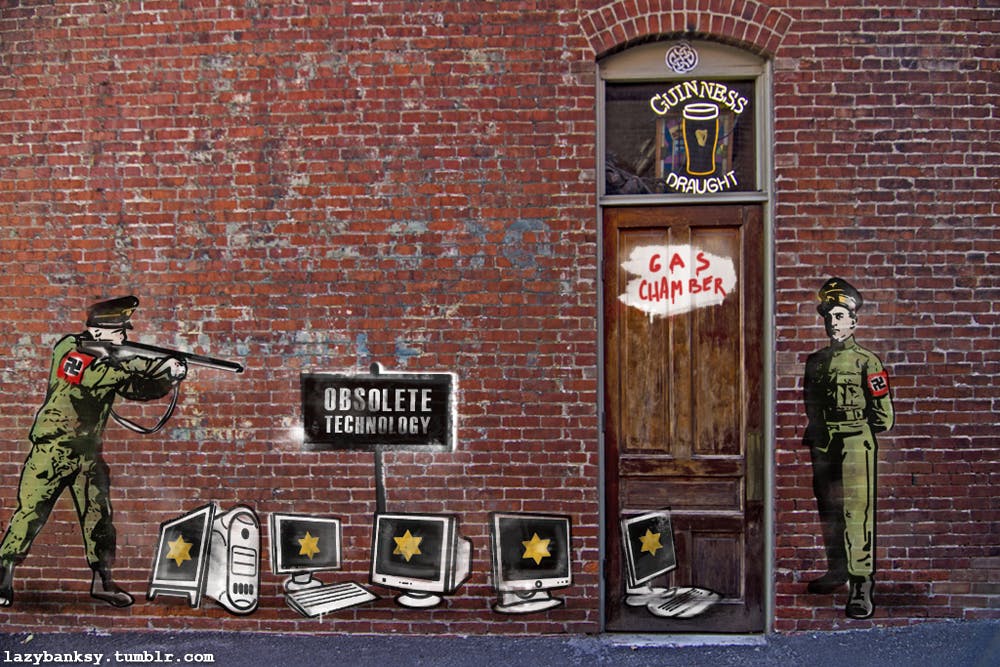 “Banksy’s work, I think, is seen as being clever because they’re efficient images,” Nudelman adds. “They’re often simple and effective juxtapositions of incongruous imagery that project a very consistent attitude.

“In just about every way, our Lazy Banksy’s are the opposite; nothing quite adds-up, the common ‘enemy’ is generally pretty unclear, the imagery is so ubiquitous that it’s pretty much meaningless.” 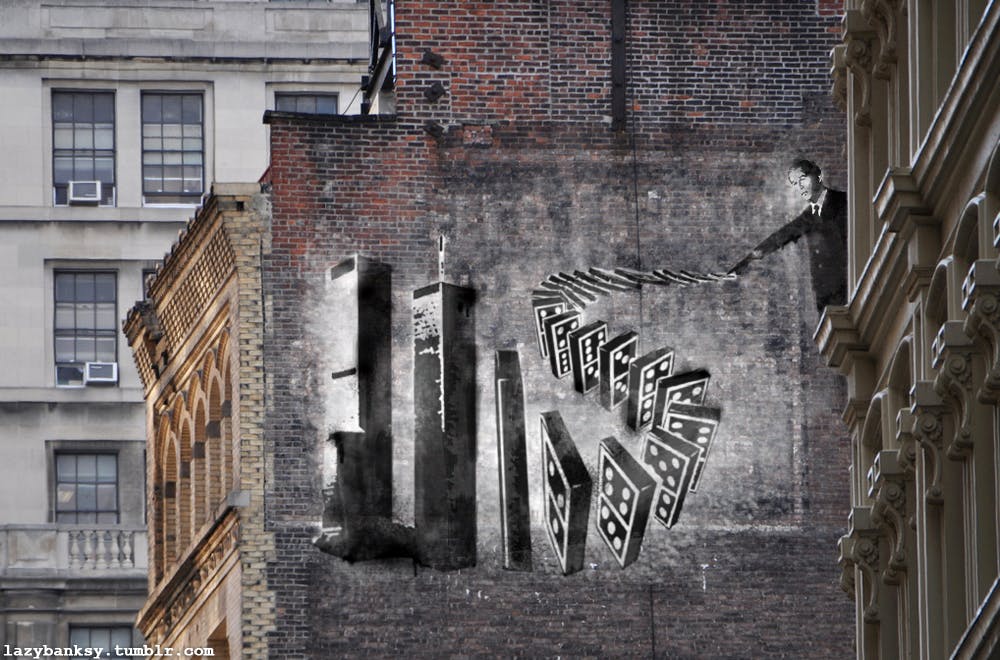 Still, the effort that goes into aping Banksy’s style, overwriting the concept, and digitally altering the street scenes makes their claim of “laziness” a little dubious.

“Sometimes I do think we’re trying harder than him!” Nudelman laughs. “For me, I think the ‘laziness’ comes more from the concepts for each illustration. They’re like the least tight political cartoons. Each one has way too much going on and is just a mess. Though, if these are less lazy than actual Banksy’s, I think it’s just because ours are 100 percent self-aware.”

Crawford agrees. “Our Banksy—and to some extent the real Banksy—has seemingly run out of things to say, and what he does say is so ham-fisted that I had to ham-fistedly make fun of it.” 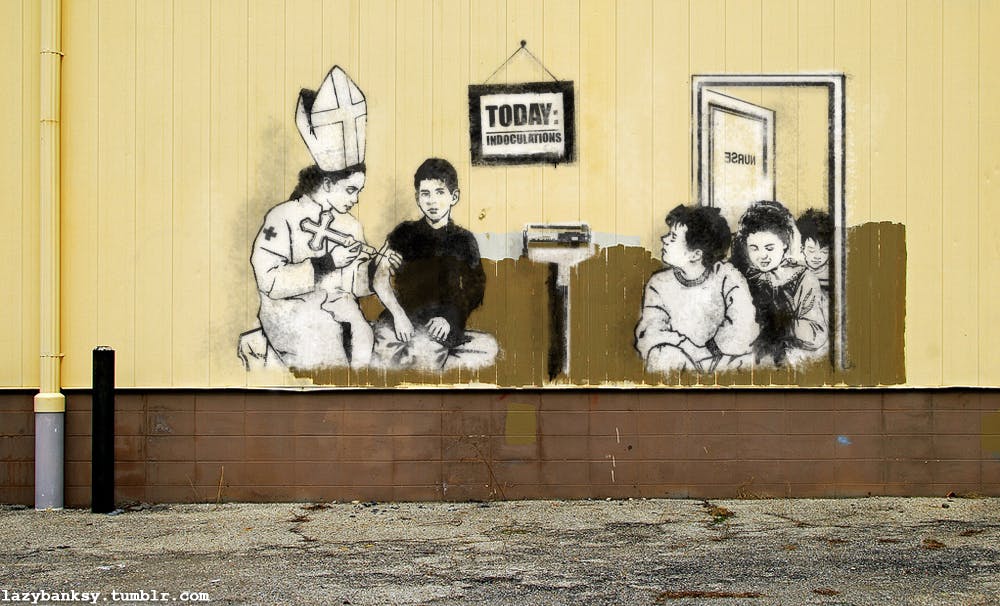 For its relentless sarcasm, Lazy Banksy does stumble onto an interesting truth. The un-lazy Bansky had to pound pavement, scale buildings, and risk arrest to bring confrontational art directly to the public. The activist artists of today can reach millions from their MacBooks, effectively unleashing an entire generation of lazy imitations. 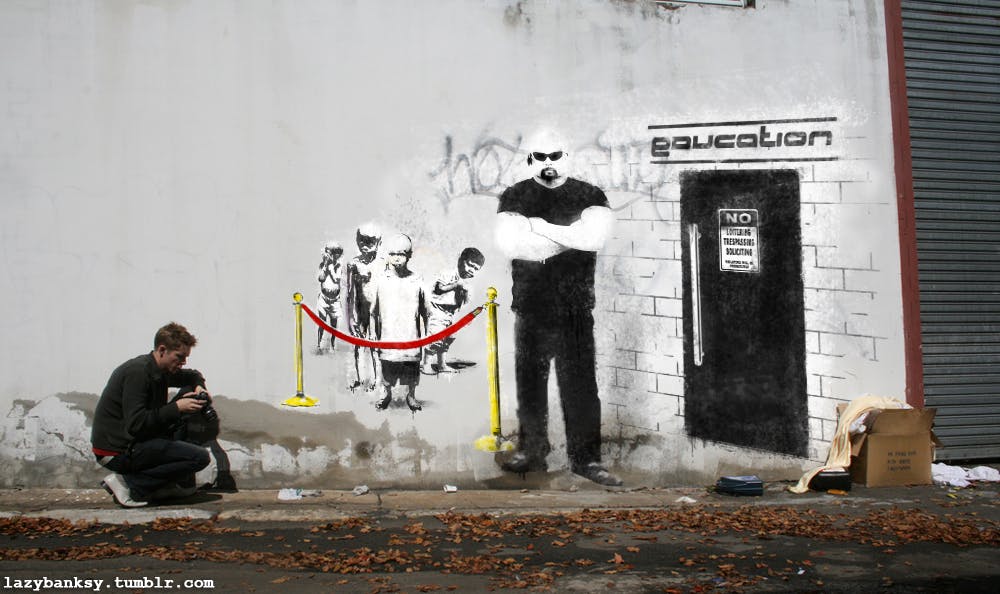 The Lazy Bansky creators are no exceptions, producing other subversive digital content on the side. Cullen Crawford is the Onion News Network staff writer who revealed Mitt Romney’s Google history, and Michael Nudelman’s work veers frequently into the experimental. For now, Lazy Banksy is just a cathartic hobby, but the creators would be open to expanding into other media.

“Maybe to a coffee table book that we could sell directly to the people we are making fun of.” 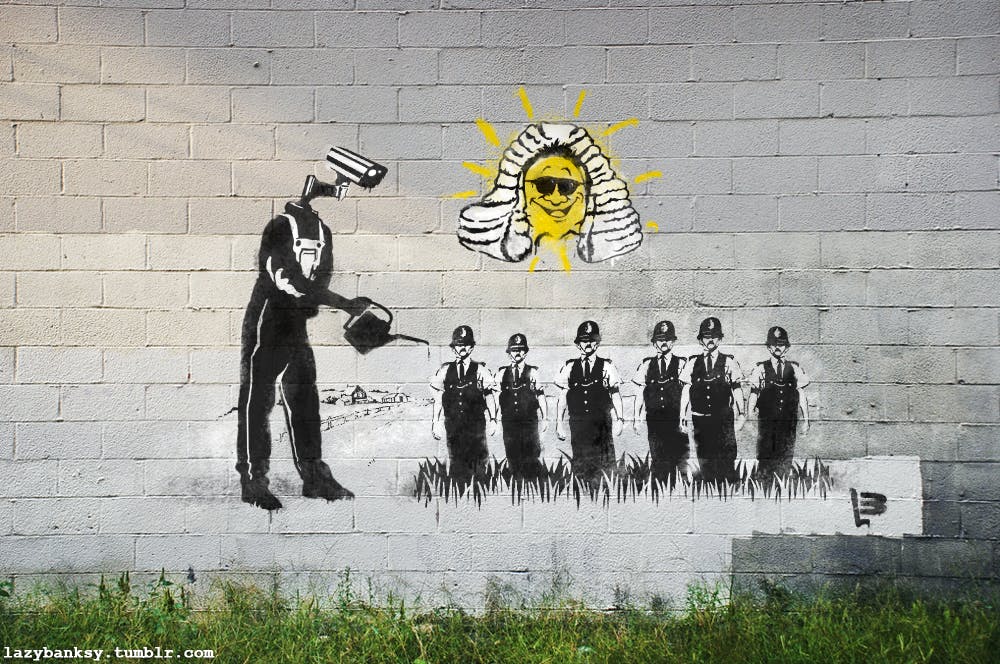 “I just assume that Tumblr is completely full of Banksy pictures anyway, and if one of these could get mistaken for the real thing that would make me extremely happy,” Crawford says.

“We’re like the real Banksy, just silently putting things out there and seeing what happens, a mysterious Robin Hood who hates advertising and loves it when rats wear the clothes that people would wear.”

All photos via Lazy Banksy/Tumblr