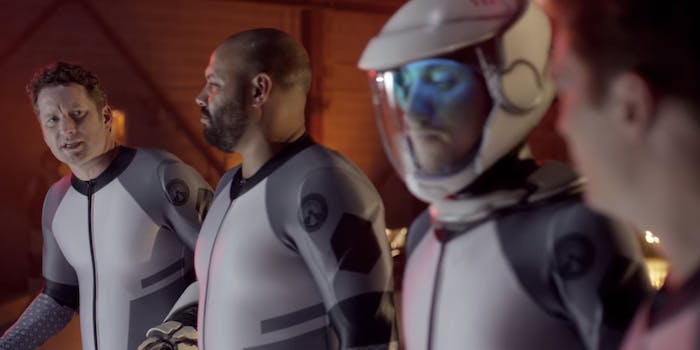 The project ended up collecting over $2.4 million from a total of 37,493 people.

When the crew behind Lazer Team, Indiegogo’s highest funded film project, tried to bend the system and give one fan a walk-on role in the film, they ended up breaking the site and gaining 535 extras instead.

“Indiegogo had a rule that said you can’t have a lottery or contest, so I thought, ‘I can beat the system,’” explained Burnie Burns, co-founder of Austin-based production house Rooster Teeth and Lazer Team writer and star. He put a $5 perk for a walk-on role late in the funding process, assuming just a single user would catch it and get lucky.

“The moment we put it up, everyone was waiting for it,” he said. “The website went down, and instead of selling one, we sold 535 of them. We had 535 extras, some of whom came from Australia to be in it. They made T-shirts and everything.”

It’s that kind of hyperdedicated fanbase that made Lazer Team possible. The film, which does not yet have a release date, follows four men who come across elements of a suit made to protect the Earth from aliens. Forced together by circumstance, they become the Lazer Team, and seek to save the world. When the project launched on Indiegogo in summer of 2014, it surpassed the initial $650,000 goal within a day. The project ended up collecting over $2.4 million from a total of 37,493 people.

“We knew once we got to that level on Indiegogo, there was no chance to disappoint them, we were going to do everything we could to make them happy,” explained director Matt Hullum.

While just shy of $2.5 million is a hefty sum, Burns points out that there aren’t a lot of movies made in the sci-fi genre, complete with special effects, at that low a price point.

“This is still the highest crowdfunded movie in the history of crowdfunding that is totally original IP,” said Burns. “It’s not based on anything else. I hope we’re challenging the audience too. The things audiences have crowdfunded successfully so far are reboots and sequels.”

“Narrative is expensive, and it’s a lot harder to get that initial buy-in or investment from an audience.”

Burns also said the timing of Lazer Team matched perfectly with Hollywood becoming aware of digital studios and feeling comfortable with getting involved, which led to the Rooster Teeth crew casting stars like Alan Ritchson and Colton Dunn in addition to their regular roster.

“The script landed in my lap, and it was just so unique and original,” said Ritchson, who’s starred in The Hunger Games: Catching Fire and the 2014 Teenage Mutant Ninja Turtles reboot. “The dialogue was great; it was the right tone. I want to be involved in things that push the creative envelope forward. I wasn’t super familiar with Rooster Teeth, so I started looking into it, and I could tell that … they’d be able to pull this off. I feel like I lucked out being a part of this.”

Unlike other digital creators who’ve made the move to film in the past year, Rooster Teeth benefits from having always focused on narrative content at its core, explained Burns.

“A lot of Web content is personality-based and vlogging,” he said. “Narrative is expensive, and it’s a lot harder to get that initial buy-in or investment from an audience.”

Hullum and Burns noted that their most dedicated fans might actually have a harder time suspending their disbelief and seeing the creators they know and love in these new roles, but they’ve put a lot of work into the film, especially into the stunts and explosions, to make Lazer Team into a true sci-fi film.

“[We had] a lot of explosions, a lot of big set pieces that take a long time to do, but we didn’t have the luxury of having a second unit,” explained Hullum. “These guys would come in, act their hearts out for six hours, and then I’d say, ‘OK, now I’m going to throw you out a window.’ Our stunt coordinator’s motto was, ‘Anybody can do it once; make sure you can do it twice.’ So I saved the stuff I thought they could only do once for the last day.”

“Our last shot was my biggest stunt,” Burns laughed. “I had to fall a distance; I didn’t realize they didn’t expect me to come out of that unhurt.”

“We did a couple rehearsals, and our stunt coordinator said to me, ‘You better not have any more rehearsals,’” elaborated Hullum.

Burns came out of it just fine, and Hullum hopes people walk away from the film feeling like they’ve been on a “big fun ride.”

“Our stunt coordinator’s motto was, ‘Anybody can do it once; make sure you can do it twice.’”

“I love movies that make you experience a lot of different stuff—action, comedy, sci-fi,” he said. “There’s really great character arcs in this movie, and that’s a huge thing for me. The payoff in the end is great.”

For Ritchson, he thinks Lazer Team will demonstrate the paradigm shift that’s happening in Hollywood with the influx of digital-groomed talent.

“We take the power away from the studios who are just regurgitating or taking the lowest risk projects and greenlighting them,” he said. “The scope of what a team like this is able to do rivals what these suits are spending $75 million to do… It just goes to show the power of people, and that people these days can drive quality content.”