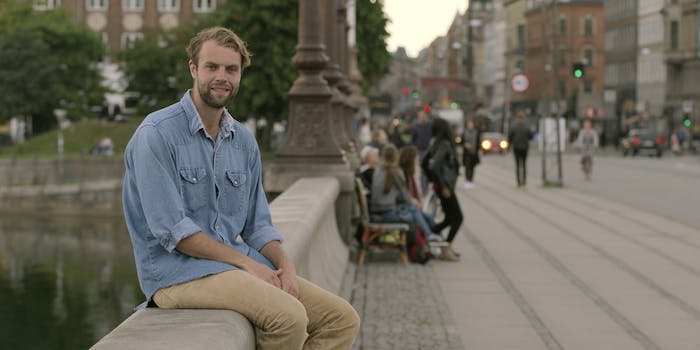 ‘Laughs in Translation’ webseries highlights the absurdity of international humor

'It was an insane sketch about aliens sexually assaulting humans. And I was not super into it.'

Brooks Wheelan—standup and former Saturday Night Live cast member—had no idea what to expect when he headed off to continental Europe to start filming his new webseries, Laughs in Translation. Not only had he not met the crew, but he also suddenly had to contend with the fact that when it comes to comedy, they do things a little differently.

“When we got over there and started going at it, I realized that there’s a lot of universal [facets] of comedy everywhere,” Brooks told the Daily Dot via phone, “but each country has some weird, small tics that make them stand out.”

And that’s the point of the series, showcasing the things that are comic in their homeland but to us may seem somewhat perverse. Like Denmark’s BonBon-Land, replete with dog fart rollercoasters and statues of mice gorging on feces. Or Leipzig’s German Institute of Humor which nourishes a bucket of stereotypes as it endeavors to teach the zing-challenged Teutons how to crack wise, one flow-chart at a time.

All good fun, but a trip to Canal+’s YouTube sketch channel in the outskirts of Paris was a joke too far for Wheelan. Corralled into a bizarre skit—“the farmer takes the sperm in his face”—by the director, Mr Octopus, after a brief negotiation as to how much “butt” he would show, the standup found himself on a slab, surrounded by aliens, and, as described by M. Poulpo, “with some stuff inside [him].” “Oh yeah, when I was being raped?” recalled Wheelan. “Those guys were weird. I think they were literally just fucking with me. It was a prank that they did where [aliens] abducted a guy and raped him. And in the sketch he was doing a press conference and everyone was laughing at him. It was just, literally, insanity. It was an insane sketch about aliens sexually assaulting humans. And I was not super into it. But my thing was what’s funnier than going along with a sketch that you don’t believe in?”

Well, maybe the fact that after all of that, he didn’t even make the final edit?

“Yeah, they cut me out of it!” said Wheelan. “But honestly, I’m very pleased that I got cut out of it because I was worried that that sketch would come out before this series and people would think, ‘That’s what Brooks has been up to—in France doing sketch comedy.’”

With currently just the three episodes produced by the comedy site Above Average—“this is really just a pilot situation to show that we can do it”—Wheelan has big plans for the series, keen to roll it out worldwide. “We’re talking to different people about producing more,” he said. “Places like South Korea, Nigeria, Japan, China, Russia, Poland, Greece, I’d love to get deep into South America. Get to some weird spots that are way different to Western Europe.”

It’s a long list of potential targets, but any place that a Francophonic alien could emerge seems suspiciously absent. What, no chance of a visit to Benin, Haiti, or Côte d’Ivoire? “French people have a weird sense of humor. Which we found out,” said Wheelan, wearily. “They’re odd. I could get behind Germany’s comedy, I could get behind Danish comedy, but I couldn’t get behind France’s comedy. Like that’s the one where I had to be like ‘look, my integrity is being [questioned].’ I didn’t think it was funny. But I did it. What are you going to do?”

Photo via Above Average