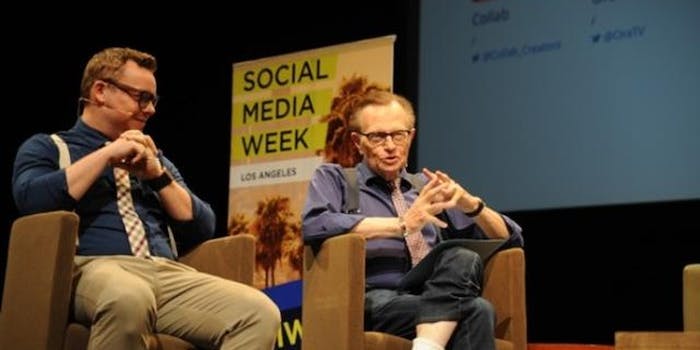 At this year’s Social Media Week Los Angeles, an event hosted by Collab carried the title “Let’s Get Larry King Trending On Vine.” Mission accomplished. A Vine featuring King’s reaction to the “Shmoney dance” has notched nearly 1 million loops in a day.

The Vine, filmed during the panel, was led by KC James and Ry Doon. The two viners instructed attendees to drop the Shmoney dance, which was created by rapper Bobby Shmurda and went viral after a clip of it achieved millions of loops on Vine. King reacts to this spectacle with confused derision, which seems to be his default response to super-short-form online video.

As of this post, King’s first Vine has more than 930,000 loops on Collab’s official Vine channel. Attendees at the panel have also revealed a few behind-the-scenes videos that show how the main Vine was created. I like to call it “Vineception.”

King, whose Larry King Now program airs on Ora.tv, is no stranger to the Internet. Therefore, I’m ready to see him drop some Vines of his own. I’ve got my eye on you, Larry.