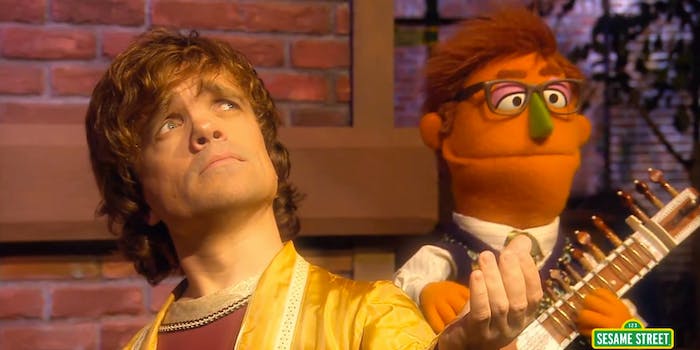 The Lannisters are a long way from Westeros.

The Lannisters are a long way from Westeros, but they’re already fitting right in on Sesame Street.

Game of Thrones stars Lena Headey and Peter Dinklage stopped by Sesame Street this week, and while they don’t play the most child-friendly characters on their hit show, they were nothing but giddy and charming. There was no backstabbing, no pushing children or Muppets from tall buildings.

Headey first appeared on the show’s regular “What’s the Word on the Street?” segment with Murray Monster, who’s unable to relax in front of the actress, probably because he just finished season 3 of the HBO series. Luckily for him, “relax” is today’s word. Headey is more than happy to help him through it, and her relaxation method doesn’t involve slurping down wine.

On the other hand, Dinklage puts his acting chops to work with a group of the cast. With this kind of charisma, who needs petty Westerosi politics?