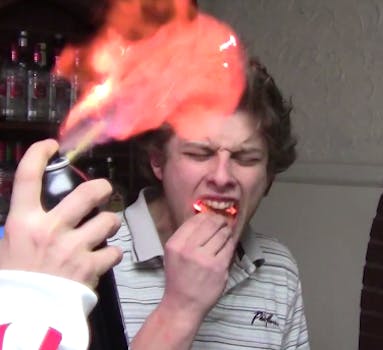 YouTube’s Lamothe Experience gives the people what they want

And what they want, apparently, is fire—lots of it.

The Canadian rejects that make up the Lamothe Experience have come upon their YouTube popularity by dressing up as Santa Claus and jumping off a house, flamboyantly squeegeeing department store windows, and disguising themselves as fugitives and running about town while causing a general ruckus.

But that’s nothing compared to the group’s latest stunt.

Earlier in February, the Experience posted a video called “Deadly Doritos,” which featured buddy Kevin eating four Doritos that were lit on fire just before going into his mouth. Before chomping down the fourth chip, Kevin asks “Is this what the people want?”

Ultimately the video only received 39,887 views, a number that’s simply not enough when you figure that Kevin spent the second half of the video eating cat litter in an attempt to stop the burning sensation in his mouth.

On Tuesday, the Lamothe Experience released its follow-up, entitled “What the people want? FIRE”, and it’s already burning up the charts. Basically, the video carries the same premise as “Deadly Doritos,” except this time the Lamothes are lighting Kevin’s hair on fire while feeding him flaming Doritos.