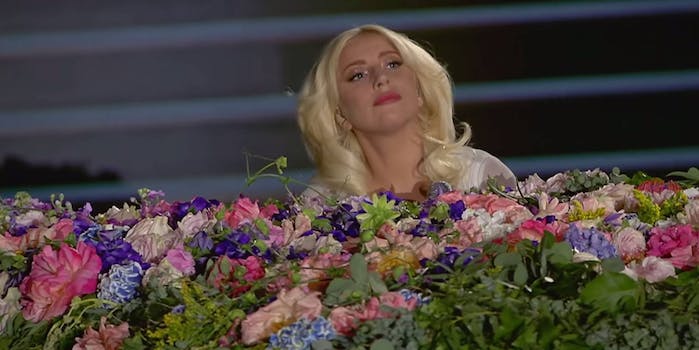 During the opening ceremonies for the Baku 2015 European Games in Baku, Azerbaijan, pop chameleon Lady Gaga brought the house down with a theatrical cover of John Lennon’s “Imagine.”

Dressed in a flowing white dress and revisiting flower child aesthetics with a blindly hopeful tone, Gaga almost lulled everyone into thinking she was turning in a straightforward interpretation of the 1971 standard.

Three minutes in, she opens up the tab—singing in a higher register with Broadway dramatics, fireworks, and original lyrics that worked like “imagine it was simple.” T-rex doesn’t like to be fed, she likes to hunt.

If you can’t locate Azerbaijan on a map, don’t worry: neither can the event organizers. More than 50 countries are participating in the inaugural European Games in a nation with a poor human rights record. Amnesty International has criticized the proceedings: “Twenty two prisoners of conscience, including prominent human rights defenders, journalists, bloggers and activists, are languishing in prisons on trumped-up charges.”

English newspaper the Guardian was likewise barred from entering the country to cover the games, among other news outlets.

While Gaga’s performance is richly moving, it’s also a heavily controlled message that fails to reflect the values of the European Games’ host nation. She killed it—but so did Freddie Mercury when he turned out Sun City.