Show business isn’t for the faint of heart. People tend to think of entertainment industry managers and agents as cutthroat types who lunge at opportunities and fight to the death for their A-list clients. But what if that’s not true?

In Maria Bamford’s new Netflix show Lady Dynamite, out today, actor Fred Melamed plays her manager, Bruce, who’s based on her real-life manager. Unlike Ana Gasteyer’s powerhouse agent Karen Grisham, Bruce is an oblivious sweetheart. He goes along with Bamford’s interest in working less upon her return to L.A. from Duluth, Minnesota, where she was hospitalized after having a mental breakdown.

Though he is often cast as villainous or corrupt authority characters—such as Sy Ableman in the Coen Brothers’ 2009 film A Serious Man—Melamed is also known as that sweet Jewish man who is so familiar that he’s sometimes unrecognizable.

I caught up with Melamed via phone to talk more about his role as Bruce, a good guy who clearly is inept in ways that create strong comedic moments between him and Bamford, with whom he has an awkwardly distant, seemingly non-sexual, mostly loving relationship.

Bruce is such an oblivious sweetheart. He cares a lot about Maria’s career, but he doesn’t seem to know exactly what to do with her. There’s a sweetness to him but also a comedic failure sensibility. How was it for you, working out that type of a character?

It was a rare pleasure for me because in many instances, in my current work that I’m called upon to do most frequently, the characters are much more arched than Bruce. In the more recent past, I’ve been playing corrupt authority figures, bad parents, nasty corporate types, lawyers, usurpers like in the Coen Brothers film. Partly because I seem authoritative as part of my set of traits, my own attitude toward authority is rather resentful, so I often enjoy lampooning people who don’t deserve authority but have it. In this situation, Bruce—I have affection for him. He’s sort of a show business true believer. He’s the kind of guy that, at all cost to himself and his clients, believes that if you keep trying—and essentially, if you keep trying the same thing—one of these years it will work. He’s had his nose pressed up against the glass of show business success for many years, but he’s just getting a whiff of the pastries on the other side of the divide. But he knows it’s there, and he can see it. What I think about him is, he’s very loyal to his clients—but that’s not the way show business works. Most people, when they get to the level of appearing on Conan or something of equal importance, they would give someone like him the brush-off. That is, they would get to a level of notoriety, and then they might want to shake him off because he has too much loser dust on him. But Maria, like Bruce, has this sort of unflagging loyalty.

How much of Bruce is the real Bruce?

Even though we took great liberties with the character of Bruce, there is a real Bruce. I don’t think Bruce is so much of a bummer as we’ve made him out to be, but I think that deep kind of loyalty is actually part of Bruce. And they have this odd, non-sexual—well, non-sexual from Maria’s point of view—type of relationship. They get sick of each other, they get mad at each other, but they never desert each other or betray each other. So that’s an odd kind of character to play, someone who is around show business and believes it could happen for him, and is so close that it’s frustrating. He believes in Maria and, as you know, first Maria thinks he is going to be threatened by her hiring this high-powered agent, but then he says, “No no, this is the only way it’s going to work!”

It was a gas to play a character that is more like the me in real life—more of a bumbler. I have this feeling about Maria. I feel that she’s like a comic meteor, and she needs a kind of idiot to keep her tethered to the ground. She needs a Margaret Dumont figure to keep her earthbound. And so that was part of my love for her, and part of our thing. I am sort of thick and don’t get it, but I never give up hope. 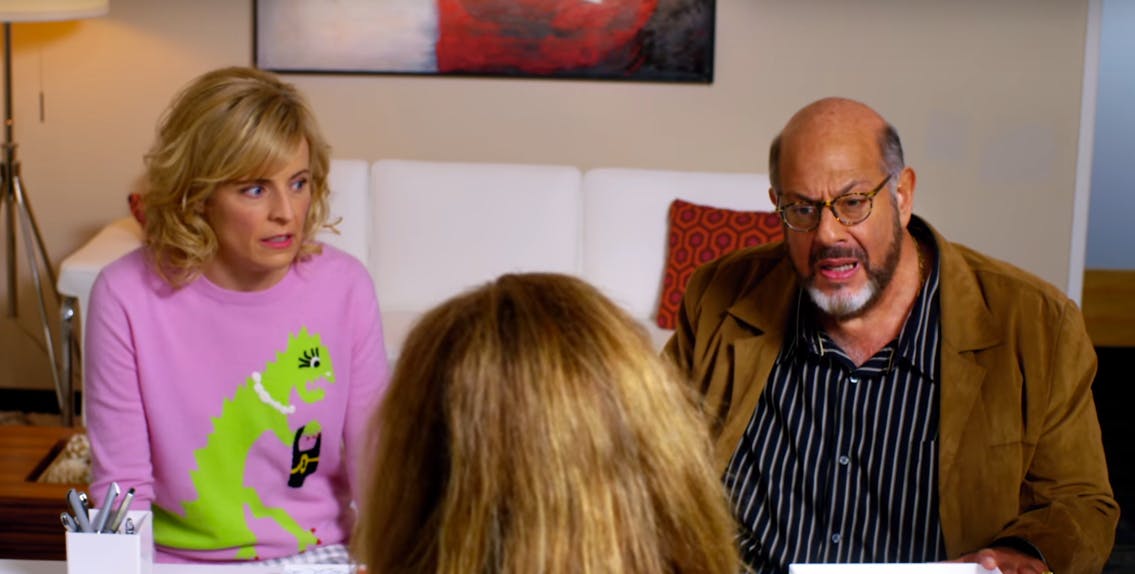 How did you two meet? How did the role of Bruce come about?

I got to know Maria while we were on the USA Network TV show Benched together. Comedians get hardened—you know, they have that hardened thing—but she doesn’t. She’s very honest and naked, vulnerable, but not at all self-pitying or hardened. She’s just her. I really liked her. I was a fan of hers. Then we got on this show Benched and we got to be friends, and we would just sit and eat lunch and talk. Maria, who is a fantastic actor, was always a little bit insecure about her acting. Somebody misled her and told her I was a really great actor and that I would have some answers for her. So I just said to her, “I’m surprised you have misgivings about acting, because you’re so good.” I was just telling her the truth. So we got to be friends and that was that. Then I was doing a show—a different one that I’m on called Casual—and I got a call that Mitch Hurwitz wanted to talk to me about a show, Lady Dynamite. I found out that Maria and Mitch had always wanted me to play this role of Bruce. They didn’t audition anybody; I had this beautiful, happy discovery that this role was invented for me. As an actor, that’s a rare thing. Maria is a lovely person, so that aspect of working with her is great. She always works very hard. She still has to deal with all the things she has to deal with—she takes medications, and she likes to take a nap during lunch. If I wasn’t so busy eating I would too. So she has some small limitations that way.

Would you say Lady Dynamite is a feel-good comedy? It’s definitely not a cringe comedy. How would you even categorize it? Could you call it a dark comedy?

It’s a strange hybrid of things. We live in an age where parody is almost impossible. Reality is so warped—you look at what’s happening, and you’re like, “How can I make fun of this? It’s so sick.” The show exaggerates certain things, but it has a sort of real premise. Everything is based in reality. I think it tries to mirror Maria’s outlook on everything… her sort of mind. I would say, to me, knowing show business, it has a big inside thing—it’s kind of like Larry Sanders, in that it has a big inside element and makes fun of things in show business. But it also makes fun of a lot of other things going on right now, including what Maria tries to do—her attempts to be kind and decent. It has a soft heart, but it also doesn’t forgive anyone, even those who seek to make the world better. It seems odd that somebody who would be a show business person invested in making a career would also be that interested in community, helping others, and those types of things. But that’s the way Maria is.

I was thinking about TV shows that are a translation of a standup comic’s persona, heightened in various ways, like Lady Dynamite—as opposed to a show that’s very much about the lives of fictional friend dynamics. Something like Friends, for instance. I am wondering how it was for you working on a show that is episodic content based around a specific person rather than working out characters with others and establishing who those people are.

As an actor, you’re always trying to make everything as genuine as you can. If somebody does something that’s crazy or self-defeating or pathetic, you have to ask yourself: “Well, how did they get to that place where they make the same mistake again?” Or: “How could they be so cruel?” Or: “Why are they so nice even though people shit on them?” How do we get to the place where we think, “Oh, that’s so extreme!” As an actor, you’re always trying to look at it, to get yourself to the real place of a person who does that, to make it as real as you can. Bruce is a real person—we took big liberties with him—so how does somebody stay hopeful even though the world takes a dump on them all the time? What kind of person does that, and why?

All of comedy has to do with how outrageous the truth is, and how wrong the truth is. I think Maria and I are essentially serious people who are dumbstruck and dismayed about how fucked up everything is, including us, probably. It’s in that disparity of how things ought to be and how things are that the funniness sort of arises. So, there were lots of opportunities to mine that in this show, both because Maria’s struggles are so great [and] because what shines in her is so great. There were lots of opportunities for that. We were very lucky, and the whole show was very lucky, and without sounding too pompous the show is very much the who’s who of comedy. Ana Gasteyer is her agent. Her best friend is Patton Oswalt. The two actors who play her parents, Ed Begley, Jr. as Joel Bamford and Mary Kay Place as Marilyn Bamford, are wonderful. Sarah Silverman and Tig Notaro make appearances. So, obviously people were turned on by the idea of Maria, and Mitch Hurwitz and Pam Brady, who were the showrunners. The show is not cynical in its tone but it’s still delicious in what it lampoons.