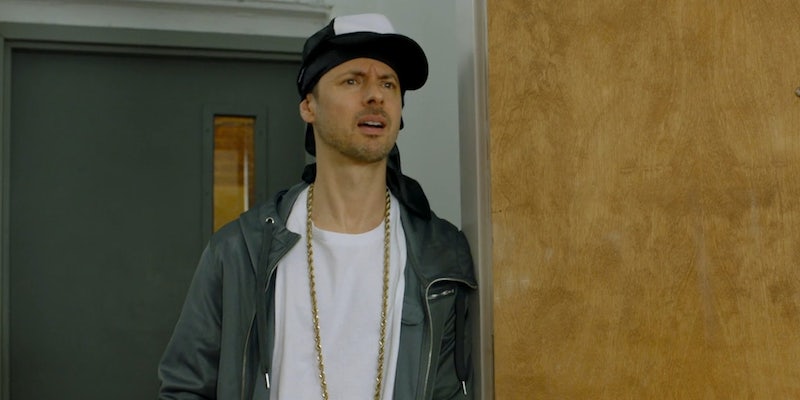 'I tend to like characters that are kind of losers but they feel great about themselves.'

Dunnigan is good at playing terrible characters who are oblivious to their flaws. He’s been a writer on Inside Amy Schumer for all three seasons, but his face might also look familiar from Reno 911!, where he played serial killer Craig Pullin, a character that also grew on YouTube.

His body-rapping persona evolved from podcast Professor Blastoff, which he cohosts with Tig Notaro and David Huntsberger. “I would just brag about how good I was at rapping, and it just caught on,” he said. He adds that they’re trying to keep Professor Blastoff  “alive” while the hosts do other projects.

They’re currently on break from Inside Amy Schumer, but since we’re talking about evolution, I asked Dunnigan about how the show’s changed.

“The first season was really trying to figure out what the show was,” he said. “A couple of the sketches that hit had Amy’s point of view and a… I don’t want to say feminist, but a female perspective. The second season, it was more focused on that. And the third season was pretty much the same. I mean, the first season was a mish-mash of ideas.”

Here are a few more revelations from our convo.

On the flow of an Inside Amy Schumer sketch:

“Come in on Monday with five ideas for sketches, really in a basic format. ‘Hey, I have this idea about a hot dog vendor who keeps eating all his hot dogs.’ OK, write that up by Thursday. And then we’ll come back in and they’ll give you notes, and then you do another rewrite of it. And then everybody does the third rewrite, and we go through it line by line and everybody pitches jokes.”

Dunnigan wrote a sketch that got cut from season 1, and sadly you can’t find it online:

“You know those guys in the foxhole, the young soldiers, and there’s bombs blowing up? And he’s like, ‘Are we gonna be all right, Johnny? We’re gonna be able to go fishing like we used to, right, Johnny?’ And Johnny’s like, ‘Yeah, it’ll be fine.’ And then he gets his legs blown off in an explosion, and he was saying, ‘Oh, we’re gonna play baseball like we used to do,’ and now he can’t because he has no legs. So he’s like, ‘We can still go fishing, right?’ And then his arms get blown off, so he keeps making up new things they’re gonna go do because he keeps losing limbs. … That was the idea, but what came out was totally different. It became a meth lab that just kept exploding. Good luck trying to find that sketch.”

He wasn’t sure the 12 Angry Men sketch would go over well:

“I was sort of against it, not in a big way, but I voiced my concern. And I was wrong. I was like, ‘Kids don’t know that movie. Kids who watch Comedy Central don’t know 12 Angry Men.’ And it was the first time Amy wasn’t starring in a sketch, so it was the first time you wouldn’t see her for a while. I thought that might be kind of weird. But I was totally wrong. It got, like, the most attention. So I shouldn’t be head of a network. Don’t ever hire me.”

On the critique that Schumer has a ‘blind spot’ about race:

“From what I know of her, if [the Guardian story is] implying she’s a racist, I can say for a fact she is not, in my opinion. The writing [on the show] is definitely not like, ‘Hey, let’s take into account every race.’ It’s just from your own experience and what you find funny.”

His love for the ‘positive idiot’:

“Looking back, I tend to like characters that are kind of losers but they feel great about themselves. … So they’re, like, positive characters.”

“Positive idiots. Yeah, they don’t torture themselves. I think I torture myself a little bit, mentally, and beat myself up at times. And so I think that’s a release for me, my brain, to express that. It’s really weird when you start to analyze comedy because it’s not funny.”

“I don’t know what that’s from. I just think it’s funny when people are trying to get huge but aren’t actually ever going to the gym.”

Feeling super confident about probably getting to the gym at some point next week. #gymrat, #live4shred

Was DEF gonna go to the gym at my hotel, but it was hard to find. A lot of weird turns. #tomorrowfosho.

80% chance I'm for sure going to the gym today. My boys(my lats) are screaming to get cream corned. #gymnut, #puttingupseriousnumbers.

On Jerry Seinfeld’s belief that political correctness is ruining comedy:

“I agree with him, wholeheartedly. In a way, the best things to talk about are controversial because there’s a lack of understanding, usually, on a topic. And then when you have a society that just says you can’t talk about something because it has a buzzword in it… you’re not listening to the content. …But the idea that we can’t talk about them, even in a joking manner, I think is the wrong side of evolution, but that’s kind of what’s happened. Certain audiences, when they hear a buzzword, they equate that to offensive as opposed to listening to the content. … When Jerry Seinfeld’s saying you’re too sensitive, it’s time to really think about things.”