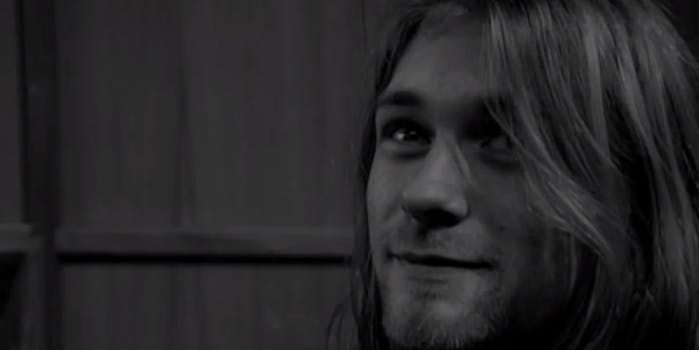 HBO will debut the film in May.

There’s been a lot of chatter about Kurt Cobain: Montage of Heck, the new documentary about Kurt Cobain, since it debuted at Sundance in January. The first trailer finally gives us an intimate glimpse into the life of Nirvana‘s frontman, and the mythology that swirled around him since his death.

The trailer includes animation, audio, archival footage, and Cobain’s artwork, as well as clips of Cobain with former wife Courtney Love and their daughter, Frances Bean. The scenes with Frances are especially moving.

In an exclusive interview with Yahoo!, director Brett Morgen—who was given unprecedented access to previously unseen material by Love, Frances, and Cobain’s family—said that “85 percent of the material that audiences will see in Montage of Heck has never been seen or rarely seen.”

On Saturday, Morgen also referenced a previously unreleased acoustic track that will be featured in the film.

Listening to a mind blowing 12 minute acoustic Cobain unheard track that will be heard on the montage of heck soundtrack. Hello @truefalse

The doc airs May 4 on HBO, which has been nailing the documentary series lately.