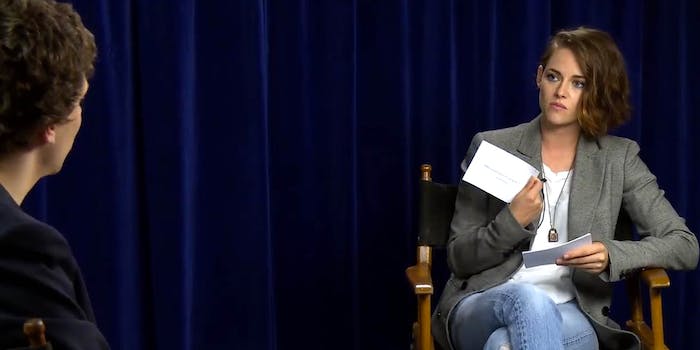 There are a lot of projects to be excited about.

If you’re a woman in search of high-quality original Web videos, there’s some good news: Refinery29 has signed deals with Kristen Stewart, Gabourey Sidibe, and America Ferrera to produce programming as part of the website’s new lineup of content.

All three actresses will be calling shots behind the camera in these new projects, Refinery29 announced this week. Stewart and Sidibe are both set to make their directorial debuts with short films as part of the company’s ShatterBox Anthology—which, as Variety notes, is “a series of 12 short-form original scripted films created by female directors, writers, and animators, launched with creative support from Women at Sundance, as well as advisory support from Killer Films’ founders Christine Vachon and Pamela Koffler.”

Stewart’s short is reportedly titled Water, and Sidibe’s is A Tale of Four Women.

Ferrera will executive produce two projects: One, Behind the Headlines, is a multimedia experience that incorporates video, text, and images as a way to humanize “the conversations around the issues that matter to women.” The second, Only Girl, will be a documentary series looking into what it’s like to be female in male-dominated fields like baseball or piloting.

Refinery29 has not announced release dates for the projects.