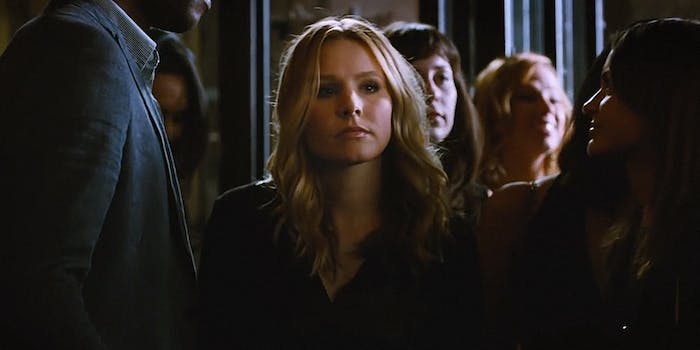 Veronica Mars, the beloved cult series that successfully Kickstarted its own movie, has the potential to return once again, according to star Kristen Bell.

The new update comes from Indiewire, which interviewed Bell’s Veronica Mars co-star Ryan Hansen (Dick Casablancas) about his new YouTube Red Series Ryan Hansen Solves Crimes on Television. Hansen didn’t have any new updates on more Veronica Mars when questioned about it, so he decided to call Bell, who would probably know more about it than him.

The good news? Bell is totally up for doing more Veronica Mars, noting that she and creator Rob Thomas have been “in constant contact about when we can do it again.”

Unfortunately, nothing is official, and it doesn’t look like it would happen anytime soon. Like many revivals and reboots of fan favorite shows and franchises, you would need to get everyone together again, which may be more difficult now than it was when the cast reunited for the movie. And this time around, Bell is starring on another TV show, NBC’s The Good Place, but she’d be open to doing a miniseries.

“Rob and I email about it every couple of months or so,” she said, according to Indiewire. “And personally I think, and I think Rob probably agrees, is that a) we’ll never make the fans pay for it again and b) the format works better as an episodic [series].”