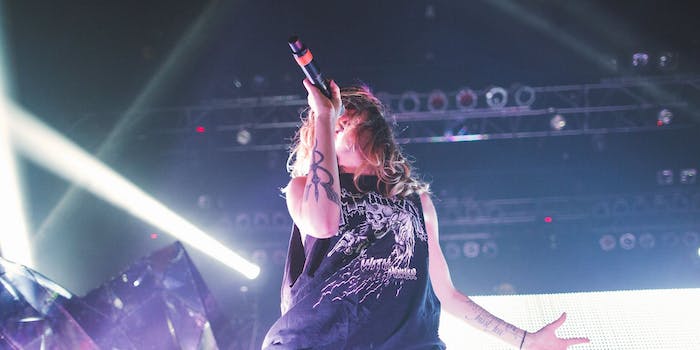 'I don't see enough people challenging the intolerance that deadmau5 preaches to his 3 million followers.'

The deadmau5 angle stems from a tweet by the Canadian DJ that was critical of Krewella’s split with musician Kris Trindl and his subsequent lawsuit against the band.

EDM protip: if youre going to make a group / trio act… dont fire the guy who actually does shit. #themoaryouknow

Since then, Yousaf wrote, the two remaining band members (Jahan and sister Jasmine Yousaf) have been on the receiving end of countless harassing comments. The prevailing narrative being that Trindl was the hard-working member, and the women were there to plod along and add decorative flair.

“I don’t see enough people challenging the intolerance that deadmau5 preaches to his 3 million followers, researching beyond the headlines they read, or protesting against the derogatory dialogue that circulates on social networks,” Yousaf wrote, adding: “Despite our efforts to give him more spotlight, Kris checked out. We couldn’t continue forcing his presence in Krewella, as his decision to disassociate himself from the group and self-admitted addiction became out of our control, and I believe this happened because he subconsciously internalized this lack of attention from fans.”

The disturbing part is that the growth in praise and attention we always wanted for Kris came with the demonization of Yasmine and me…  (i.e.: “the girls didn’t do anything except use their sex to sell the group”…”this is why you should never go into business with a woman”…”they are just puppets for the genius who did all the work”… But beyond how this affected me personally, these accusations actually facilitated the spread of negativity toward women in this industry and across the globe.

It’s a must-read that concludes on a more macro, actionable note about combating this level of poisonous and attitude-reaffirming bullying. Unfortunately, deadmau5 didn’t seem to grasp its central thesis.

so @krewella you can take your 1920's smear "sex card" campaign and shove it up your fuckin ass.

. @deadmau5 Hi Joel. Did you read the article? I think you missed the point. Here’s the cliffsnotes version: pic.twitter.com/CdboPNImfR