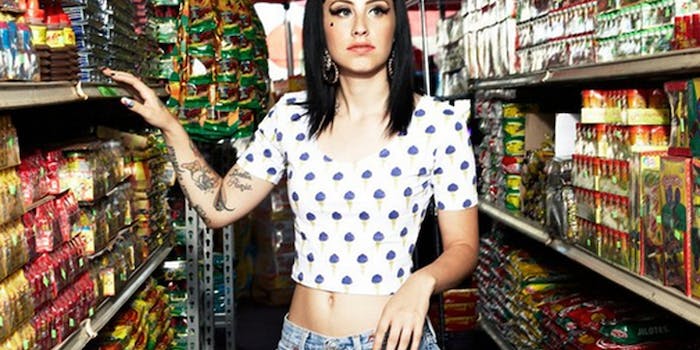 Think YouTube hits can lead to major label blockbusters in the music industry? It might be time to think again.

The figure is the lowest opening week figure for a major label release in the history of the Billboard Hot 200 chart. It tops—or bottoms—Soulja Boy’s 2009 debut Souljaboytellem.com, an Interscope-released album that likely still holds the title for most outrageous album title ever.

Kreayshawn is like Justin Bieber and, inevitably, PSY, in the sense that their insanely quick ascent into stardom was sparked by a video that first showed up on YouTube. “Gucci Gucci” was one of the most popular videos of the 2011 summer, racking up three million views in its first three weeks.

There’s no doubting the value of YouTube for pop music careers. YouTube catapulted Lana Del Ray to Saturday Night Live, Karmin landed on the (back) cover of Rolling Stone, and Carly Rae Jepsen just dropped her debut album. But Kreayshawn’s lack of success on the sales charts may reiterated the importance of moving swiftly to capitalize on online fame.

Kreayshawn signed a record deal with Columbia Records, talked 500,000 people into following her on Twitter, and had nude photos leaked (SFW)—all about 10 months before her album was commercially available.

All of that media has come to Kreayshawn’s fans for the hefty sum of zero dollars. Her album, however, sells in mp3 form on Amazon for $9.99.

There may be Somethin’ ‘Bout Kreay, but that somethin’ may want to be half price.